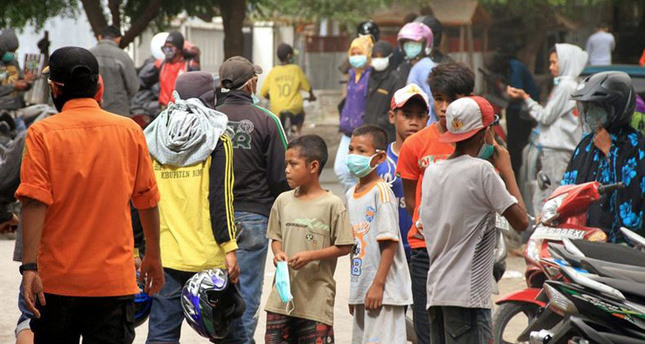 by AA May 31, 2014 12:00 am
NUSA TENGGARA BARAT, Indonesia — Thousands of Indonesians were forced to evacuate their homes Saturday as a volcano on the island of Sumbawa continued to spew smoke and ash around 3,000 meters into the air.

The government set up refugee camps to accommodate those forced to flee, some of them evacuated to nearby hills due to the threat of a tsunami.

The cloud of ash is threatening to wreak havoc with air traffic in Australia and Southeast Asia. By Saturday evening it had caused a majority of flights in and out of Darwin airport to be cancelled along with some Virgin airlines flights between Perth and Bali.

Mount Sangeang Api in Bima, West Nusa Tenggara, is in one of the most active areas of the Pacific "ring of fire" - a large series of volcanoes encircling the Pacific Ocean

Although the government cleared Sumbawa of people in 1985, some former residents continue to work on plantations on the island.

Since the first recorded eruption of Mount Sangeang Api in 1512, it is understood to have erupted around 20 times - three of those occurring since Friday.