US and China go head to head at Asia security forum 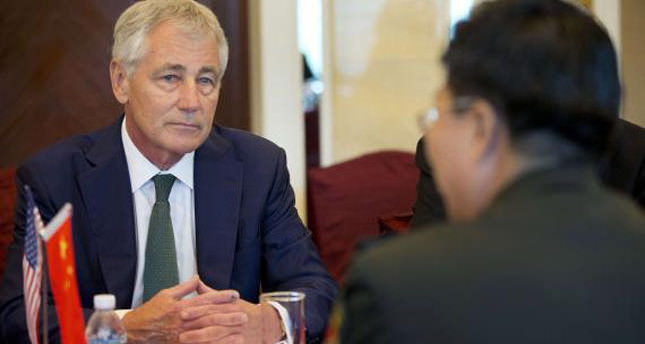 by May 31, 2014 12:00 am
BEIJING — The United States and China squared off at an Asian security forum on Saturday, with the U.S. defense secretary accusing Beijing of destabilizing the region and a top Chinese general retorting that his comments were "threat and intimidation".

He warned Beijing that the United States was committed to its geopolitical rebalance to the Asia-Pacific region and "will not look the other way when fundamental principles of the international order are being challenged".

Hagel said the United States took no position on the merits of rival territorial claims in the region, but added: "We firmly oppose any nation's use of intimidation, coercion, or the threat of force to assert these claims."

"I felt that Secretary Hagel's speech is full of hegemonism, threat and intimidation," he told reporters just after the speech.

Wang said the speech was aimed at causing trouble in the Asia-Pacific. Hagel's comments followed the keynote address by Japanese Prime Minister Shinzo Abe at the same forum on Friday evening, who pledged "utmost support" to Southeast Asian countries, several of which are locked in maritime disputes with China.

"I felt that they were just trying to echo each other," Wang said. Hagel later held a bilateral meeting with Wang, where the Chinese military leader expressed his surprise at the U.S. defense secretary's speech.

"You were very candid this morning, and to be frank, more than our expectations," he said. "Although I do think those criticisms are groundless, I do appreciate your candor … likewise we will also share our candor."

A senior U.S. defense official said that, despite Wang's opening remarks, the tone of the meeting had been "businesslike and fairly amicable".

While Hagel went over ground he covered in his speech, Wang spent most of the meeting talking about U.S.-China military-to-military contacts, including Chinese participation in forthcoming military exercises, the official said.

The U.S. official said Hagel's speech had been well received by other Asian delegations with the exception of China.

In Beijing, President Xi Jinping said China would not initiate aggressive action in the South China Sea but would respond if others did, the official Xinhua news agency reported.

"We will never stir up trouble, but will react in the necessary way to the provocations of countries involved," Xinhua quoted Xi as saying in a meeting on Friday with Prime Minister Najib Razak of Malaysia.

China claims almost the entire oil- and gas-rich South China Seas, and dismisses competing claims from Taiwan, Brunei, Vietnam, the Philippines and Malaysia. Japan also has a territorial row with China over islands in the East China Sea. Tensions have surged in recent weeks after China placed an oil rig in waters claimed by Vietnam, and the Philippines said Beijing could be building an airstrip on a disputed island. Japan's defense ministry said Chinese SU-27 fighters came as close as 50 meters (170 ft) to a Japanese OP-3C surveillance plane near disputed islets last week and within 30 metres of a YS-11EB electronic intelligence aircraft. Japanese Defence Minister Itsunori Onodera said Tokyo perceived an "increasingly severe regional security environment".

"It is unfortunate that there are security concerns in the East and South China Seas," he said. "Japan as well as all concerned parties must uphold the rule of law and never attempt to unilaterally change the status quo by force."

On Friday, Prime Minister Shinzo Abe pitched his plan for Japan to take on a bigger international security role and told the Singapore forum that Tokyo would offer its "utmost support" to Southeast Asian countries in their efforts to protect their seas and airspace.

In a pointed dig at China, he said Japan would provide coastguard patrol boats to the Philippines and Vietnam.

"This will hinge on whether the Japanese side is willing to amend the erroneous policy towards China and improve relations between China and Japan," he said. "Japan should correct its mistakes as soon as possible to improve China-Japan ties." The strong comments at the Shangri-La Dialogue come as Abe pursues a controversial push to ease restrictions of the post-war, pacifist constitution that has kept Japan's military from fighting overseas since World War Two.

Despite memories of Japan's harsh wartime occupation of much of Southeast Asia, several countries in the region may view Abe's message favorably because of China's increasing assertiveness.

Hagel repeatedly stressed Obama's commitment to the Asia-Pacific rebalance and said the strong U.S. military presence in the region would endure.

"To ensure that the rebalance is fully implemented, both President Obama and I remain committed to ensuring that any reductions in U.S. defense spending do not come at the expense of America's commitments in the Asia-Pacific," he said.