Thai military shuts down Bangkok in fear of protests 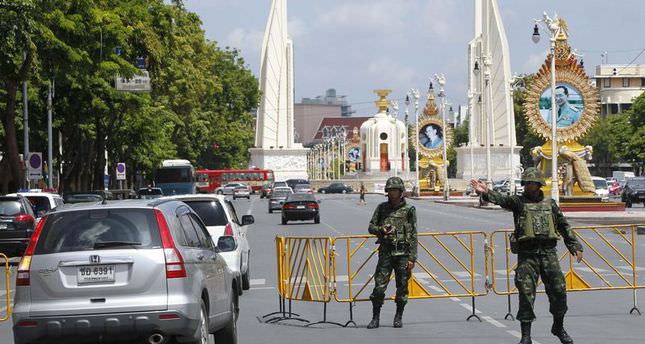 by AA Jun 01, 2014 12:00 am
BANGKOK - It was a game of cat mouse across Bangkok on Sunday, the military blockading the usually bustling commercial Rajprasong area with around 6,000 troops, but protesters still managing to hold the upper hand - flash mobs erupting sporadically around the Thai capital.

At daybreak, glitzy malls, department stores, and some elevated railway stations were closed in the downtown area, which was almost deserted bar a few fully-armed soldiers and journalists. However, within a few hours the first solitary protester had appeared - a lone woman wearing a mask emblazoned with the word "People."

She flashed a victory sign, but was quickly arrested and carted away by the military.

But in the afternoon, as troops appeared to be in complete control of the situation, a group of protesters, some with black tape across their mouths, suddenly appeared in front of Terminal 21 - an airport-themed mall in another area of Rajprasong.

They broke into a chorus of boos, their hands quickly forming into the three fingered "Liberty, Equality, Brotherhood" sign synonymous with the French revolution.

As two plainclothes police tried to detain one of them, a crowd gathered, the protester being released after several minutes of shouting.
Elsewhere, another group quickly appeared, chanting and holding signs saying "Soldier get out" and "No Coup."

Soon after, the police and military closed the whole area.

It is thought that Sunday's protests were the work of Thai veteran social activist Sombat Boonngam-anong, who is still to reply to a summons from the coup leaders' Internal Security Operational Command.

Boonngam-anong - a member of the "Red Shirts" movement, predominantly supporters of the Shinawatra political clan, of which Yingluck Shinawatra was the latest ousted PM - has regularly taunted the military with calls to protest on his Facebook page. Boonngam-anong has also encouraged people to disguise themselves with masks of prominent Thai political personalities' faces, the most popular being the country's new self-elected prime minister - coup leader Gen. Prayuth Chan-ocha.

Demonstrations against the coup had been growing since the military took control May 22, but they ceased Thursday after massive military deployment in Bangkok. To counter the vast military presence, some pro-democracy activists have been forced to adopt more clandestine forms of protest, standing in public places and ostensibly reading books such as George Orwell's critique of totalitarian society "1984," or "The Guide to Civil Resistance".

On Saturday, after a lone seated red-shirted protester brandishing a sign carrying the words "Election only" was dragged away by armed soldiers, a 10-minute standoff - caught on camera - took place outside of a Louis Vuitton shop between the military and onlookers, the man finally driven away in an ambulance.

The anti-coup mood is in stark contrast to that of the "Yellow Shirt" People Democratic Reform Committee's. At a birthday party on Thursday, pictures and video showed PDRC leaders – including former Democrat Party MP Suthep Thaugsuban - dressed in military chic ecstatically celebrating the coup with wine and cognac at an upmarket French bistro.

The images were too much for even the military to bear, a spokesman on Friday asking people not to wear "military-style uniforms" in order to avoid "misunderstandings".

Despite the protests, the coup has been generally well received in Bangkok, whose middle-class formed the core of the anti-government movement that had taken to the streets since November to protest Yingluck's government.

The mood is typical of Thai society, the general public at first coming out in favor of the army, only for frustrations to fester with the slow democratic pace into mass uprisings.

"I think it will be the same this time," a political analyst, who did not want to be identified for fear of reprisals, told the Anadolu Agency.

"[But] when the military put its reforms in place and Bangkok people see restrictions on freedom and electoral rights, they may well react in a large way."