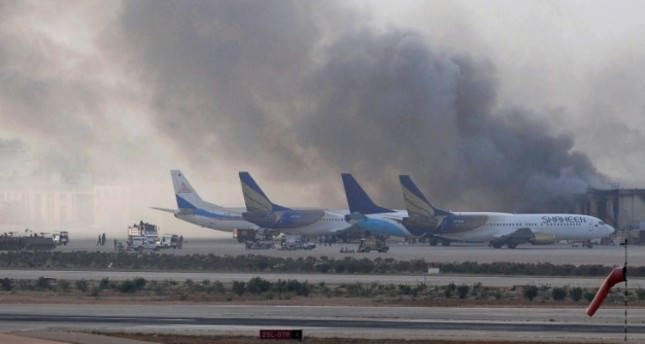 by AA Jun 10, 2014 12:00 am
KARACHI — The main coalition of Pakistani Taliban claimed responsibility for the second attack on Karachi international airport facilities in less than two days.

Tehrik-e-Taliban Pakistan spokesperson Shahidullah Shahid said Tuesday's assault on an airport security training academy would be followed by more, as the Taliban are now in an "open war" with the government. He said the attack was a "sequel" to a Taliban attack on Karachi airport on Sunday which killed 39 people, including 10 Taliban militants.

The spokesperson for the Airport Security Force, Colonel Tahir Ali, told reporters that the attackers had been repulsed and flight operations would resume. "Terrorists could not enter the ASF headquarters limits as security was already tightened. The situation is completely under control," said Ali. He added that security forces had cordoned off the Pahalwan Ghot shanty town near the airport, where the attackers are believed to have taken refuge.

Intermitant sounds of gunfire have been heard around Pahalwan Ghot after security forces launched a search operation. Ali said two militants riding a motorbike used heavy weaponry to fire at security personnel and female ASF officials, but fled after the security forces returned fire. No security personnel were killed or injured in the attack.
Last Update: Jun 10, 2014 5:05 pm
RELATED TOPICS