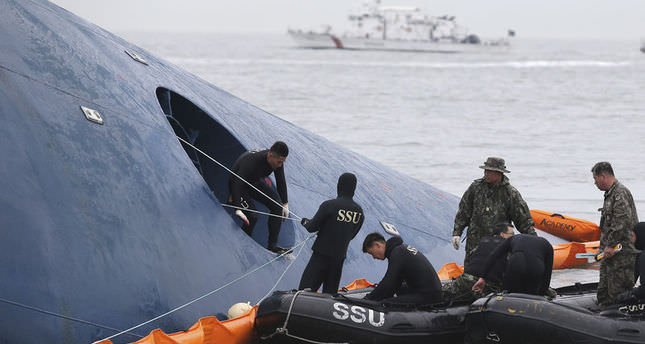 by Jun 17, 2014 12:00 am
The surviving crew of a South Korean ferry that sank in April killing more than 300 people and sparking a nationwide outpouring of grief argued on Tuesday that it was up to the coastguard to rescue the passengers, not them.

Lawyers for the 15, who face charges ranging from homicide to negligence, said that once coastguard rescuers had reached the sharply listing vessel, the crew's job was over.

"The crew share the belief that they thought the coastguard should be fully capable of the rescue because there was a distress call and they arrived and they were the ones with professional skills and equipment," lawyer Im Ju-young told the court on the second day of the trial in Gwangju, the closest city to the scene of the disaster.

The Sewol, overloaded and travelling too fast, sank off the southwest coast on April 16 on a routine journey from Incheon on the mainland to the southern holiday island of Jeju.

Of the 476 passengers and crew on board, 339 were children and teachers from the same school on the outskirts of Seoul. Only 172 people were rescued and the remainder are all presumed to have drowned.

Crew members, including the captain, were caught on video abandoning ship while the children stayed in their cabins as told, wearing life jackets and awaiting further orders.