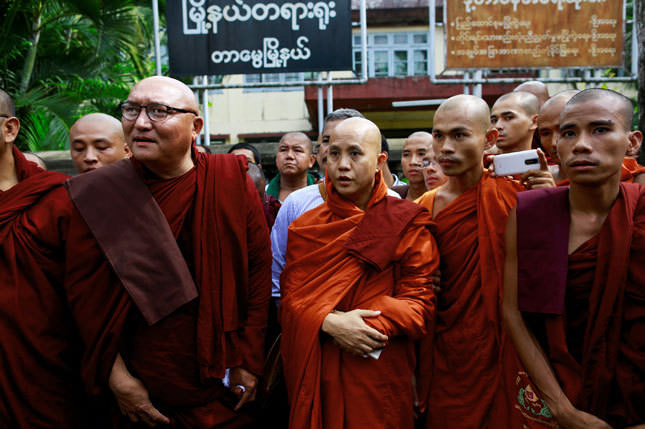 by AA Jun 21, 2014 12:00 am
Muslim places of worship and shops in different parts of Sri Lanka have been attacked early Saturday morning, following week-long anti-Muslim violence that has killed three Muslims in the southwestern region of the country.

Buddhist monks and mobs attacked a mosque in the village of Navanthurai in Jaffna district and a prayer room at the University of Jaffna, according to residents and students in the area.

A branch of No Limit fashion chain owned by Muslims was burnt down at 2.45 a.m. on Saturday in Panadura, 25 km south of Colombo.

"6 petrol bombs were hurled at the store in a pre-dawn attack in which nobody was hurt but the building and the goods were damaged," sources told Anadolu Agency on condition of anonymity.

Special Task Force personnel were put on duty to control the crowd outside the building. Armoured vehicles were seen patrolling the area after the attack.

"Two fire brigade vehicles came, but they had no water to douse the fire," eye witnesses told AA.

Meanwhile, a solidarity protest was staged in Jaffna and the Tamil National People's Front condemned the recent attacks on Muslims in the south.

The clashes, which killed three Muslims and a Tamil who worked on a Muslim farm, started after hardline Sinhalese Buddhist nationalist group Bodu Bala Sena held a rally in southwestern town Aluthgama on Sunday, before marching into predominantly Muslim areas.

Bodu Bala Sena, which literally translates to Buddhist Power Force, is a right-wing Buddhist group that was established after the end of Sri Lanka's decades-long civil war in 2009. They belong to the country's Sinhalese Buddhist majority and have been accused of inciting hate against other religions in Sri Lanka.