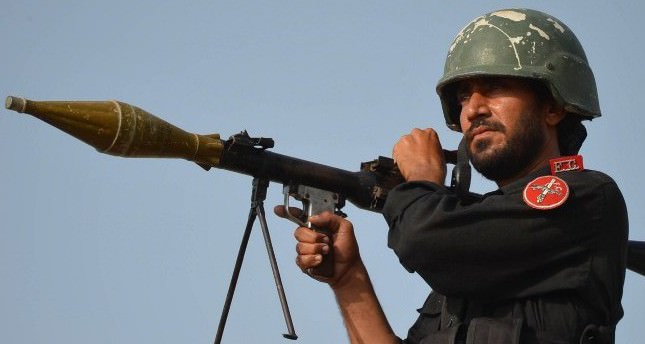 by Jun 21, 2014 12:00 am
Pakistani helicopter gunships pounded militant targets in the country's northwest Saturday, killing up to 30 rebels, as the number of civilians fleeing an expected ground offensive passed 200,000.

The military said 30 insurgents were killed in targeted air strikes early Saturday in Khyber and North Waziristan Agencies, semi-autonomous tribal regions on the Afghan border which are an important base for the Pakistani Taliban.

"According to details at 0200 hours jet aircrafts destroyed two hideouts close to Pak-Afghan border in Khyber killing 10 terrorists," it said in a statement.

Nearly 280 insurgents have been killed since the start of the operation on Sunday, according to security officials, though it is not possible to confirm the number or identity of those killed.

The military offensive began after a bloody and dramatic attack on Karachi airport last week brought an end to months of largely fruitless government efforts to negotiate a peace deal with the Tehreek-e-Taliban Pakistan.

The fighting has triggered a huge exodus of civilians from North Waziristan, both into the Pakistani cities of Bannu, Peshawar and Kohat and across the border into Afghanistan.
The number fleeing is expected to increase as more than 200,000 people are trapped in North Waziristan due to a shoot-on-sight curfew which was extended for one day after it expired on Friday.

He said trucks loaded with food and water were being dispatched to the border of North Waziristan to help people fleeing the expected ground offensive.
"Thousands of people are still on their way and we are doing our best to facilitate them," he said.

An AFP correspondent in Bannu saw hundreds of people walking on foot to the town. The government-run children hospital in Bannu is overcrowded with children suffering from diarrhoea.

Due to lack of space at the hospital four to five children were being accommodated in one bed.

Around half a dozen children lying outside the hospital were being treated with the drip bags hanging from tree branches.

Registration points and camps have been set up to deal with the influx of people in Bannu, but many prefer to travel on to stay with relatives in other areas.