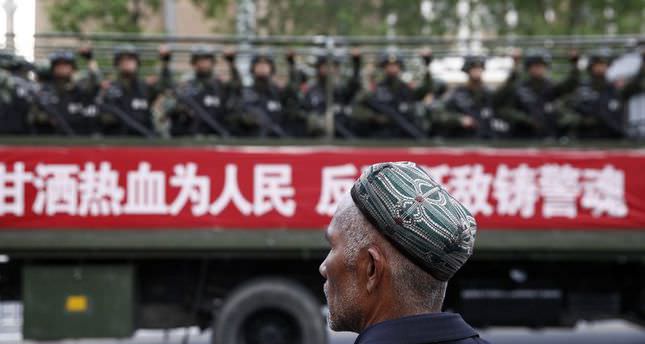 by Jun 23, 2014 12:00 am
Authorities in China's far-flung East Turkestan (Xinjiang) have detained 380 people and busted 32 terror cells in a month-long crackdown on violence, state media said on Monday, following an upsurge in attacks blamed on Islamist militants.

China has been toughening its response after a spate of bloody incidents nationwide centered on East Turkestan, the traditional home of the Muslim Turkic nation, Uyghurs.

China has blamed previous attacks on Islamist separatists in the region, who, it says, want to establish an independent state.

The official Legal Daily said 315 people had been tried for terror-related offences, at least 13 of whom have been executed, an announcement made last week. Six police officers had died on the job as well, the report added.

Exiled Uighur groups and human rights activists say the government's own repressive policies in East Turkestan, including controls on Islam, have provoked unrest.

Around 200 people have died in unrest in East Turkestan (Xinjiang) in the past year or so, the government says, including 13 people shot dead by police in a weekend attack on a police station.

China has tightened its grip on public discussion about Xinjiang too.

In January, police detained prominent Uyghur economics professor Ilham Tohti and charged him with separatism.
Tohti, who taught at a university in Beijing, was known for championing the rights of the Uyghurs.

His lawyer, Li Fangping, said last week that Tohti might already have been tried and sentenced in public.

This had not happened, however, Li wrote on Monday on the Chinese mobile social network WeChat, adding that Tohti's case had only been handed over to the prosecutor, a necessary preliminary to a trial.