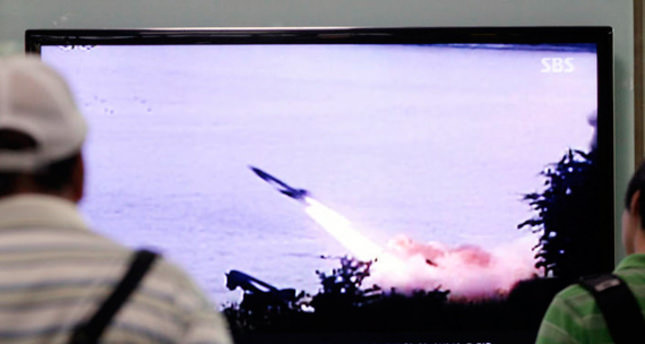 The Defense Ministry official, who spoke on condition of anonymity, citing department rules, said the missiles were fired from Wonsan and are presumed to be short-range ballistic missiles. The official said North Korea fired the missiles without designating no-sail zones, which the South Korean military views as provocative. South Korean media quoted officials as saying the projectiles appeared to be Scud missiles.

North Korea regularly test-fires missiles and artillery, both to refine its weapons and to express its anger over various developments in Seoul and Washington. North Korea has in recent days criticized alleged South Korean artillery firing drills near a disputed maritime boundary in the Yellow Sea that has been the scene of several bloody skirmishes between the rival nations in recent years. The missile displays also come days before the leader of North Korea's only major ally, Chinese President Xi Jinping, is set to meet with South Korean President Park Geun-hye. Seoul and Beijing have long pressed North Korea to abandon its nuclear weapons ambitions.

On Thursday, North Korea's army accused South Korea of firing shells into the North's waters near the sea boundary.

The Korean Peninsula is still technically in a state of war because the 1950-53 Korean War ended with an armistice and not a peace treaty.