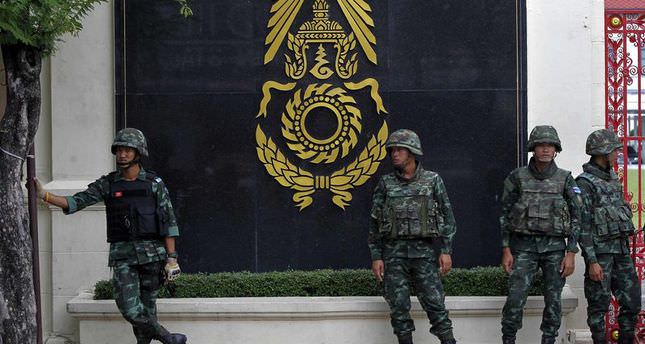 by Anadolu Agency Jun 30, 2014 12:00 am
Thailand's military government said on Monday it had begun an overhaul of the electoral system following an announcement by junta leader General Prayuth Chan-ocha that polls could take place by late 2015.

The military took power on May 22 in a bloodless coup following six months of street demonstrations that contributed to the ousting of Prime Minister Yingluck Shinawatra. A court had already ordered her to step down after finding her guilty of abuse of power on May 7.

Permanent secretary for defence Surasak Kanchanarat said political party reform, decentralisation of power and "investigations and penalties for those groups that commit electoral fraud" were top on the military's agenda.

"We will talk about obstacles to an election and corruption," Surasak told reporters ahead of a meeting later on Monday with the Election Commision.

The junta, formally known as the National Council for Peace and Order, has scrapped the constitution and its leader, General Prayuth Chan-ocha, said on Friday that a new, temporary charter would be ready in July.

The army chief said this would allow an interim cabinet to be installed by September and a reform council would then start work on a longer-term constitution.

He also said in his weekly televised speech that a general election could be held around October 2015, the firmest date he has given until now.

The United States and European Union downgraded diplomatic ties with Thailand after the coup. Washington has called for a quick return to civilian government and a move toward "free and fair elections".