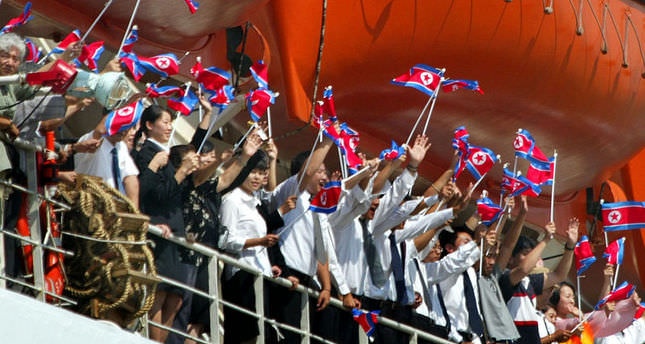 by AA Jul 04, 2014 12:00 am
In a sign of increasingly warm bilateral relations, Japan has agreed to lift some sanctions it had imposed on North Korea to force Pyongyang to account for and return its citizens abducted in the 1970s and 1980s.

The cabinet gave formal approval at a Friday morning meeting to the lifting of some sanctions in three areas - travel, port calls by North Korean ships, and money.

The move came as the North unveiled a plan to form a special committee headed by a leader close to its supreme leader, Kim Jong-un, to investigate the situation of abducted Japanese still residing in the North, including discovering the remains of those who may have died there.

Tokyo was impressed that the 30-member investigative committee was closely tied to the National Defense Commission, chaired by Kim - the highest political organ of the state. It seemed to suggest that Pyongyang was serious about resolving the long-standing irritant.

"Under the principle of 'action for action', we will lift some of the sanctions," said Prime Minister Shinzo Abe on Thursday.

Abe said that Japan will loosen restrictions on travel and remittances for both ethnic Koreans in Japan and Japanese wishing to travel to the North, North Koreans visiting Japan and permit limited port calls by the North's ships for humanitarian purposes, and the reporting limit for money taken or sent to the North - the only country in the world that Japan does not officially recognize.

The government's spokesman was quick to underline that the action does not affect sanctions imposed as part of the United Nations program to end the North's nuclear weapon and long-range missile programs. The sanctions lifted were imposed unilaterally by Japan specifically because of the kidnapping issue.

During the late 1970s and early 1980s, North Korean agents literally snatched at least 17 citizens off the streets of Japan and spirited them away to the North. Former leader Kim Jong-il admitted and apologized for the kidnappings in 2002, the same year Pyongyang returned five abductees to Japan.

The abductees were allegedly abducted to train North Korean spies in the Japanese language and customs, although that doesn't explain their kidnapping 13-year-old Megumi Yokota on her way home from school.

Of the 17 official abductees - Tokyo suspects the number might be higher - Pyongyang has long maintained that the remaining twelve - including Yokota - have died. In 2004 it sent what it claimed were Yokota's remains, but DNA tests suggested that they belonged to another person - a significant reason why Tokyo has never accepted the notion that the abductees are fully accounted for.

North Korea hopes to ultimately win recognition from Japan -which would open the way to World War II reparations, and trade and investment which the North critically needs - as relations with China - its only real ally and trading partner - turn cooler.

As if to underscore this, China's President Xi Jinping paid a state visit to South Korea's capital Seoul this past week.

It was significant that for his first visit to the Korean Peninsula as China's supreme leader, Xi chose South Korea and not his close ally in the north.