Taliban sets at least 400 fuel trucks on fire in Kabul 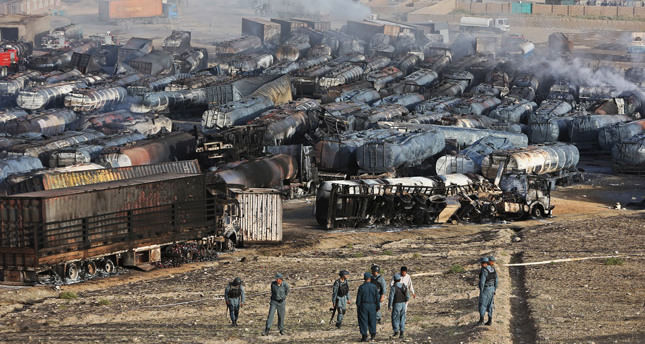 by Associated Press Jul 05, 2014 12:00 am
Attackers set fire to hundreds of fuel tanker trucks in a parking lot on the outskirts of the Afghan capital, witnesses said Saturday, prompting angry drivers to block a major highway to demand reimbursement for their losses.

Hundreds of other drivers stood by helplessly on Saturday morning, unable to salvage any property as flames and smoke rose from the area and several fire engines rushed to the site.

"We couldn't tell if the attackers were Taliban or other people," one of the drivers, 35-year-old Juma Gul said. "They were dressed in uniforms we couldn't understand what was happening. They were shooting toward the drivers and they were setting the tankers on fire. The gunmen were targeting any of the drivers who wanted to return to their trucks."

Kabul police spokesman Hashmat Stanikzai said about 400 trucks caught fire late Friday and continued to burn through Saturday morning, but he did not confirm the cause or provide other details. The Interior Ministry said it has set up a team to investigate the incident.

Truck drivers later blocked the main highway between Kabul and the southern city of Kandahar to protest what they said was a slow response by the government and to demand reimbursement for their losses.