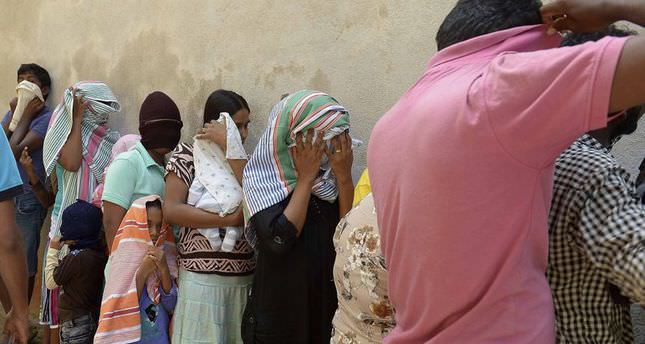 by AA Jul 08, 2014 12:00 am
Five people have been remanded by a Sri Lankan court for alleged involvement in transporting a group of Sri Lankan asylum seekers to Australia, where they were intercepted by immigration authorities.

Despite public outrage, Australia handed the 41 asylum seekers over to the Sri Lankan navy Sunday. All of the children on board the boat have been released, with the rest released on bail of 5,000 Sri Lankan Rupees ($38) each.

The five facilitators were remanded until July 14, including a Special Task Force officer and the owner of the boat who is believed to be a fisherman.

Relatives and friends were waiting outside Galle Magistrate's Court in southwestern Sri Lanka to pay the bail money and take the deportees home after their troubled journey.

Most of the deportees, who included women and children, had their faces covered with towels, collars and other material as they disembarked the Naval bus which taken them to the court.

"Australian authorities have ill-treated us. They have given expired food, which had a date of May 22," a tearful Anthony Fernando, 38, told the Anadolu Agency, joining the queue outside the court. "I have gone to Australia by boat to find employment, and later take my family to join me."

The Sri Lankan navy handed the migrants over to the Criminal Investigation Division, who interrogated them before they were produced at the court.

Many of the deportees said they had travelled simply in flip-flops and carrying just a small bag.

"My husband went to Australia to get a job. He was a driver before he embarked on a boat journey. We have lost the savings, and dignity," Manushika Sandamali told the Anadolu Agency, as she waited under a tree, trying to shelter from the heat outside the court.