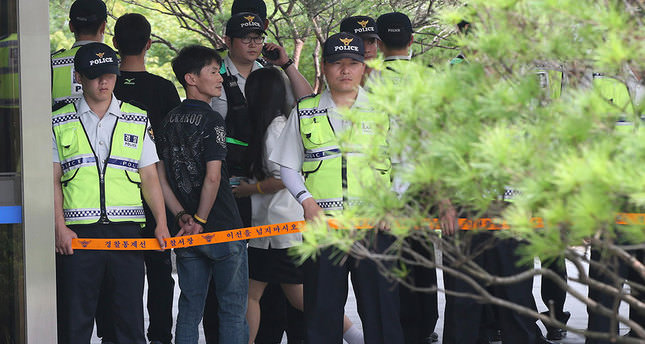 by AA Jul 28, 2014 12:00 am
Surviving high school students from April's Sewol ferry disaster testified in a South Korean court Monday - for the first time during the trial of the vessel's captain and 14 crew members.

The 15 ferry staff face a range of charges including "homicide through willful negligence" in the case of Captain Lee Joon-seok and three of his crew-after they disembarked the sinking Sewol on April 16, leaving hundreds of passengers to fend for themselves.

The official death toll stood at 294 as of Monday, with another ten people still unaccounted for-most of the victims were teenagers on a planned high school trip to the resort island of Jeju.

Six surviving students asked the Ansan branch of Suwon District Court south of Seoul not to spare the captain and crew members harsh punishments for their actions.

They were allowed to testify in the town where they attend school even though the trial is being overseen by Gwangju District Court-and their accounts of the disaster added weight to an already grisly picture of the events of April 16.

One of the teenagers recorded her testimony from a private room within the court, explaining how a repeated tannoy announcement on the sinking Sewol had told the passengers "stay put."

Another of the witnesses described how a group of students had been waiting in one of the ferry's corridors to be rescued.

"With no arrival of rescuers, they jumped into the sea one after another, and after I jumped, a wave hit the exit and then the remaining ten people were unable to come out," she said.

A further testimony criticized the already rescued crew members for failing to help those still on the ferry, and for looking on "motionlessly" despite being told there were many students on board.

Their call for harsh punishments was based on the claim that the death toll could have been significantly lower if the passengers had been told to evacuate from the start.

While several more students are due to testify Tuesday, there was a separate post-Sewol legal development Monday.

Incheon District Court issued a warrant to formally arrest the son of the ferry's de facto owner on embezzlement charges.

Yoo Dae-kyun had been on the run for several weeks before being tracked down in a small apartment near Seoul last Friday.

The circumstances of his father Yoo Byung-eun's death remain mysterious after his body was discovered in a plum orchard in the south of the country on June 12-but was only confirmed to be that of the elder Yoo last week.