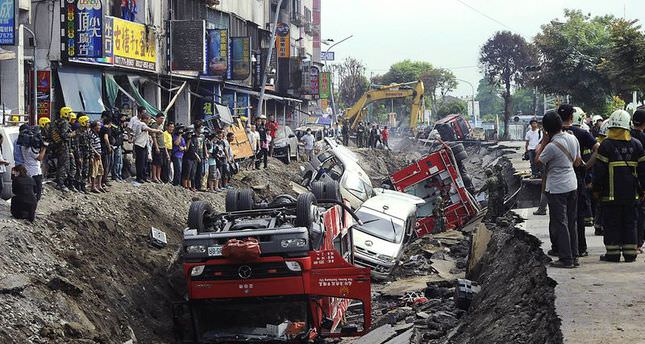 by Aug 01, 2014 12:00 am
At least 25 people were killed and some 270 injured in multiple gas explosions in the southern Taiwanese city of Kaohsiung, local authorities said Friday.

Four firefighters called to the scene were among the dead after the blasts late Thursday.

A series of underground gas explosions damaged 6 kilometres of streets, local TV reported. Pictures from the scene showed holes ripped in the roads.

"Based on our preliminary investigation, the gases spilled include propene," said Minister of Economic Affairs Chang Chia-juch at a news conference in Taipei.

Chang said the source of the gas, a by-product in the processing of fossil fuels, had been cut off.

Thousands of emergency workers and soldiers were called to help with the rescue efforts early Friday.

Soldiers were searching for leaks at the scene.

According to the police, two passersby were found injured on the balcony of a building. At least one car and some scooters were found on the third floors of buildings.

TV ran videos from residents that showed the windows and doors of buildings shattered by the explosions.

Some residents interviewed by TV remained terrified and said they felt they were in a war when the series of explosions occurred.

More than 1,000 residents in the affected area have been evacuated to schools nearby, according to Kaohsiung City Government.

Several people were reported missing, including city officials who arrived at the scene late Thursday.

Residents complained about the slowness of the city's emergency response. A resident interviewed by TVBS said they reported the smell of strange gases the police three hours before the explosions. "But none of them took action to cut off the pipes. Why not?" he said.

Jiang ordered that, beginning August 5, flags in Taiwan would fly at half-mast for three days after the July 31 Kaohsiung explosions and the plane crash on July 23 on Penghu Island.

President Ma Ying-jeou expressed his condolences to the victims' families and said Friday that pipes used by petrochemical plants under all urban areas in Taiwan would be checked.

The cause of the gas leaks was under investigation, according to the cabinet.

The other two pipelines are managed by LCY Chemical Corp and China Petrochemical Development Corporation. Both denied any involvement in the blasts, local media reported.

LCY Chemical Corp, which makes petrochemical products, Friday denied accusations of poor management of propene pipes. Local newspapers reported there was something wrong on Thursday during the transmission of propene from China General Terminal & Distribution Corporation to LCY.

LCY Chemical spokesperson Abby Pan told a news conference Friday afternoon that pipes on the scene are larger then LCY's.

"Those are large diameter pipes, whose diameter is 8 inches [20 centimetres]. The diameter of our pipes is 4 inches," Pan said.