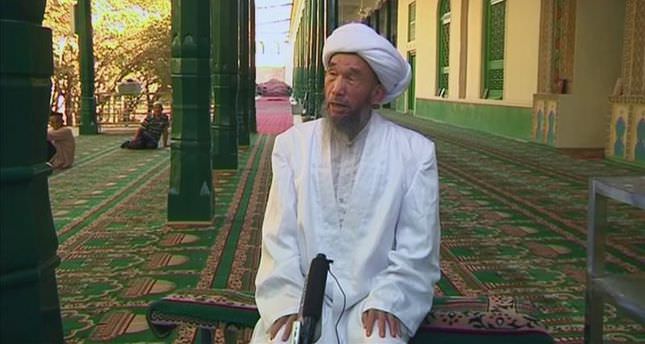 by AA Aug 01, 2014 12:00 am
Police say they have apprehended one man and shot dead two others suspected of the murder of the imam of China's largest mosque.

Authorities said that the incident happened when the three men resisted arrest with knives and axes at noon on Wednesday.

Jume Tahir was killed at 6:58 a.m. on Wednesday after attending morning prayers, according to the state-run Xinhua News Agency.

The reasons for his death remain unclear.

The 74-year-old had been the state-appointed imam of Kashgar's ancient and symbolic Id Kah Mosque in Xinjiang Uighur Autonomous Region, since 2003. On Tuesday, he had presided over the mosque's Eid al-Fitr ceremony.

The 600-year old mosque receives on average of over 2,000 Muslims everyday, but on important religious occasions can welcome up to 20,000.

Xinhua reported that according to police, the three suspects - Memetjan Remutillan, Turghun Tursun, and Nurmemet Abidilimit - were "influenced by religious extremism" and planned to "do something big" to increase their influence.

The men are understood to be members of the area's Uighur minority - a Turkic-speaking Muslim ethnic minority group, many of whom are agitating for independence and have accused the Chinese government of human rights violations and discrimination.

Tahir was also a National People's Congress deputy and the vice president of the China Islamic Association.

Xinhua reported that the association has called for peace and a stand against violence and "terrorism" following recent attacks in Xinjiang.

Ömer Kanat, a spokesman for the U.S.-based World Uyghur Congress, told the Wall Street Journal on Friday that the imam had a reputation as a "tool for the government."

"When something happens, the government lets him speak and criticize activities of Uighur," Mr. Kanat said.