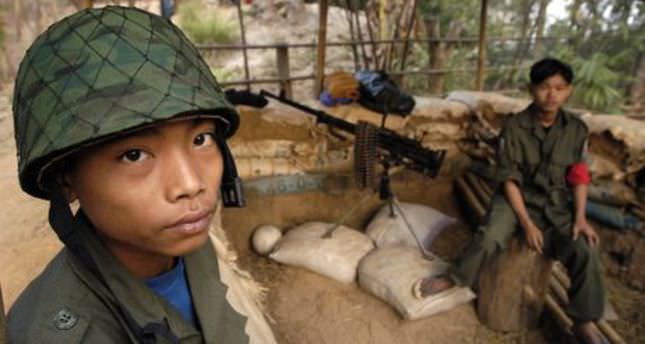 by AA Aug 01, 2014 12:00 am
Myanmar's notorious military has released 91 people recruited as child soldiers in the latest gesture by the reformist government towards abolishing the use of children in the armed forces.

The United Nations announced Friday the release of the children and young people-some of whom have become adults since being recruited. It follows the release in January of 96 others from the armed forces.

Since the UN signed a pact with Myanmar's army in June 2012, a total of 364 children and young people have been released.

It is not clear how many children currently serve in the country's military, which has a brutal reputation following decades of accusations of human rights abuses including the use of rape as a weapon of war.

Groups have also accused the Tatmadaw, as it's known, of using children as army porters in dangerous frontline regions.

Before 2011 Myanmar was ruled by a military junta, but the country has brought in sweeping reforms under President Thein Sein's quasi-civilian government, which is made up of former generals.

The new government has launched a publicity campaign promoting the abolition of child soldiers using billboards in Yangon, the country's main city, and elsewhere. But the Tatmadaw has yet to completely halt its use of children.