At least 100 missing in massive landslide in Nepal 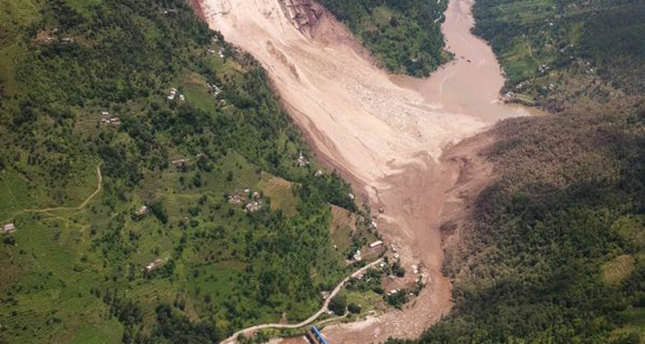 by Aug 03, 2014 12:00 am
At least a 100 people were believed missing in a landslide in the Sunkoshi River in Nepal that prompted warnings of floods downstream in India on Sunday, forcing evacuations of thousands of villagers.

The landslide in central Nepal on Saturday buried homes and created a large mud dam that blocked the river's flow.

Nine people are confirmed to have been killed, with fears the death toll will climb much higher.

Water levels were said to be receding as the nearly 100-metre-high mud dam had started to overflow on its own, while Nepal's army is preparing to use explosives to blast open portions of it.

"We've formed an assessment team, which is supposed to submit a report in three days, after finding out exactly how many people are missing," said Jhanka Dhakal, the head of National Emergency Operation Centre, at the Home Ministry, told dpa.

"The locals say at least a hundred have gone missing, but we have no definite figures yet."

Deputy Prime Minister Bamdev Gautam visited the site in Sindupalchowk district and asked people asked to be on alert.

Authorities in neighbouring India issued a flood-alert for the north-eastern state of Bihar, where the Sunkoshi River flows from the Himalayan country and is locally known as the Kosi River.

At least 44,000 villagers living along the embankment of Kosi had been moved to 117 relief camps, Bihar state disaster management official Anirudh Kumar said.

Kumar said the use of explosives to clear the landslide could release an uncontrollable torrent of water that may inundate hundreds of Bihar's villages, affecting as many as 425,000 people.

Broadcaster NDTV reported that blasting of the mud dam could result in a 10-metre high wall of water sweeping down from Nepal.

"We are already seeing a rise in water levels. Many from low-lying areas have moved to safer places on their own, but those who have not, we are forcibly removing with help of the officials," Kumar added.

The official said that though the discharge of water was within manageable limits, the authorities were taking all precautions. "We are not taking any chances as floods in the Kosi river in the past years has caused heavy losses of human life and property," he added.

State officials said as many as 200,000 people across nine districts would be relocated.

Around 800 personnel from state and federal disaster response agencies were mobilized and the military was kept on standby to help with relief operations.