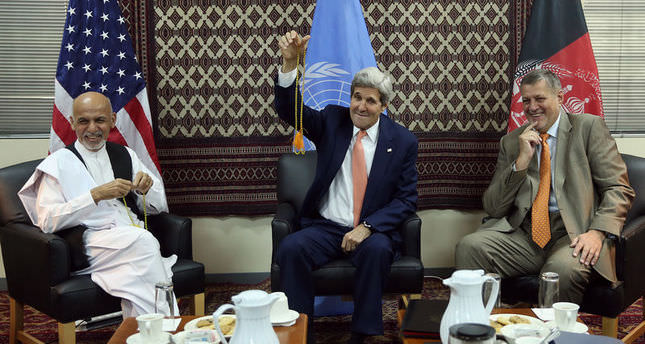 by Associated Press Aug 08, 2014 12:00 am
Afghanistan's feuding presidential candidates agreed Friday to resolve their election dispute and said they would set an inauguration date before the end of August.

The breakthrough came as U.S. Secretary of State John Kerry opened a second day of talks in Afghanistan aimed at preventing the fragile country from collapsing into political chaos after disputed elections.

Ahmadzai said he and Abdullah, whom he called a "brother and colleague," were determined to turn what he termed a "vicious circle" of turmoil in many parts of the Muslim world into a "virtuous circle" for the people of Afghanistan.

Kerry is on a previously unannounced visit to Kabul to urge the candidates to accept the results of an ongoing audit of all ballots from the June election and form a national unity government by early September when NATO leaders will meet in Wales to consider their options in Afghanistan.

The U.S. believes the Sept. 4 NATO summit would be an opportunity for the eventual election winner to present himself to the alliance and introduce his new Cabinet, which, under a formula brokered by Kerry on his last visit to Kabul in June, would include the election loser appointing a new "chief executive officer," who would serve under the president. Once created, the Afghan government would convene a "loya jirga," or nationwide assembly, to formalize the chief executive post as a prime minister, the plan envisions.

Kerry's trip comes as results from the June 14 runoff are being audited in a process that he brokered last month but that had halted to mark the end the of the Muslim holy month of Ramadan in late July. The audit resumed earlier this week with representatives of both candidates participating but still at odds over charges of widespread malfeasance in the vote.

Preliminary results showed Ahmadzai well ahead of Abdullah, but both sides claimed irregularities and fraud.

With the clock ticking until the NATO summit, U.S. officials traveling with Kerry said he would stress the importance of the candidates looking at the "big picture" as the audit continues and not getting bogged down in endless debates over minor discrepancies that are unlikely to affect the final results.

Kerry arrived in Kabul just two days after U.S. Maj. Gen. Harold Greene was killed by an Afghan soldier at the national defense university. Greene is the most senior American soldier to be killed in the Afghan conflict and his slaying underscored the tensions that persist as the U.S. combat role winds down. The political uncertainty that Kerry is trying to address is another complicating factor in the transition.