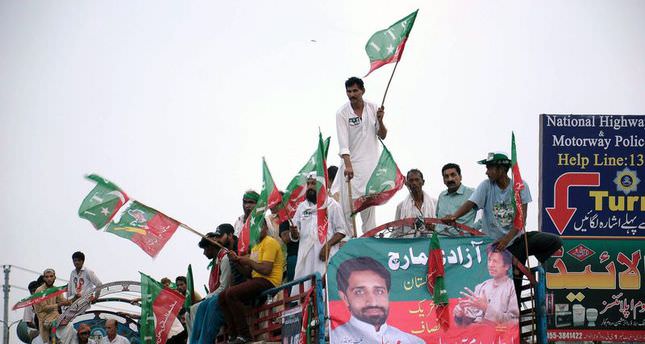 by Aug 15, 2014 12:00 am
Pakistani opposition politician Imran Khan said he and his followers were fired on by government supporters during a rally Friday, but police said that although there were clashes between the two sides no shots were fired.

Khan is leading thousands of his supporters to the capital Islamabad in a rally to demand Prime Minister Nawaz Sharif resign, saying that last year's general elections in which he swept to power were rigged.

Speaking to ARY television news, Khan said: "They threw stones at us while standing at police vans. They fired bullets at us."

An AFP photographer at the scene heard no gunfire, and police also said there were no shots.

"Workers of PTI and PML-N clashed in Gujranwala and threw stones at each other," a police spokesperson told AFP. "There was no firing incident."

The AFP photographer said a group of up to 40 youths who were following the convoy and shouting slogans clashed with PTI workers, but police later dispersed them.