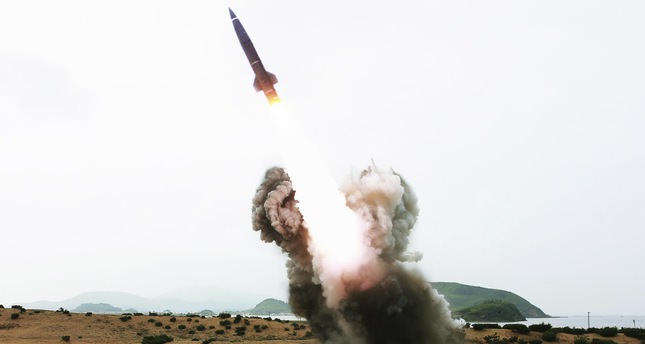 by Aug 17, 2014 12:00 am
North Korea warned Sunday of a possible "merciless" pre-emptive strike as it blasted an upcoming joint US-South Korean military exercise as a rehearsal for nuclear war.

South Korea vowed to go ahead from Monday with the annual Ulchi Freedom Guardian drill, which is aimed at testing readiness to combat any North Korean invasion.

Although largely played out on computers, the exercise involves tens of thousands of South Korean and US troops.


In a statement carried Sunday by the official Korean Central News Agency, the North's military accused Washington and Seoul of planning a "dangerous" rehearsal for nuclear war.

"We declare once again that we will mercilessly open the strongest... pre-emptive strike of our own style any time at our discretion," it said.

North Korean soldiers were ready to "turn the strongholds of aggression into a sea of fire and ashes", the statement said.


"Our troops will strongly retaliate against any provocations from North Korea," the South's joint chiefs of staff warned in a statement.

Tensions have been high on the Korean peninsula following an extended series of North Korean missile and rocket tests in recent months.

The nuclear-armed communist country has defended the tests as a legitimate exercise in self-defence.


Seoul had proposed holding high-level talks with Pyongyang to discuss family reunions for those separated by the 1950-53 Korean War and other issues of "mutual interest".

But there has been no official response from Pyongyang.