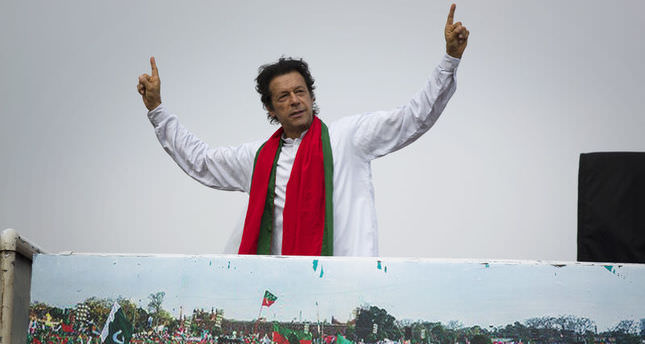 by AA Aug 21, 2014 12:00 am
In 1992, Imran Khan captained the Pakistan cricket team to World Cup victory in Australia; 12 years later he is leading a protest calling for the resignation of Pakistan's Prime Minister Nawaz Sharif. On Aug. 14, he and his supporters in the Pakistan Tehrik-e-Insaaf party began a march from northeastern city Lahore to Pakistan's capital, Islamabad.

They have brought Islamabad to a standstill and are now parked outside of parliament house. The strength of the campaign is based largely on Khan's personal appeal. He's thought to be the only Pakistani politician whose charisma outweighs that of his party that, in no small part, is related to his popularity as a national sporting icon.

He retired after the World Cup victory and has been restless ever since. As a philanthropist, he traveled the country and raised funds for a state-of-the-art cancer hospital in Lahore, opened in 1994 and named after his mother, who had died of cancer. As a columnist he began spreading his political ideas in the daily Jang newspaper; though many suggested the British school-educated, Oxford graduate could not possibly have written Urdu to such a high standard without ghostwriters.

The political path that led Khan to his current protest began in 1996, when he formed Pakistan Tehrik-e-Insaaf. Complete failure in the 1997 election, the gaining of only a single seat in 2002 and an election boycott in 2008 meant that for years the party was considered little more than Khan's personal fan club.

A mass gathering organized in Lahore in 2011 was the mark of his rise to the top and similar public meetings and rallies followed it. The media, both in Pakistan and internationally, became obsessed with Khan who suddenly posed a threat to the dominant duo of the Pakistan People's Party and Pakistan Muslim League.

The media attention convinced Khan that the outcome of the 2013 elections would be him entering the Prime Minister's residence; he was not prepared for Sharif's convincing victory and immediately targeted the new prime minister. Khan said he accepted the result, in the country's interest, but demanded an audit of four constituencies, including the one he ran in and lost himself - to prove claims that the poll had been rigged.

Apart from the alleged rigging, Khan and Sharif's relationship has a residual bitterness. Sharif pulled out of a 2008 multi-party election boycott, in protest against military rule, at the last minute, leaving Khan feeling cheated and setting a harsh tone for future exchanges with Sharif.

The election commission staunchly refused to entertain Khan's demands and despite government offers, his stance has changed. Khan is no longer asking for an audit, he's asking for the disbanding of the government and a new election. That has culminated in thousands of his supporters marching to Islamabad, where they have teamed up with the more radical Pakistan Awami Tehrik, who are calling for an end to electoral politics.