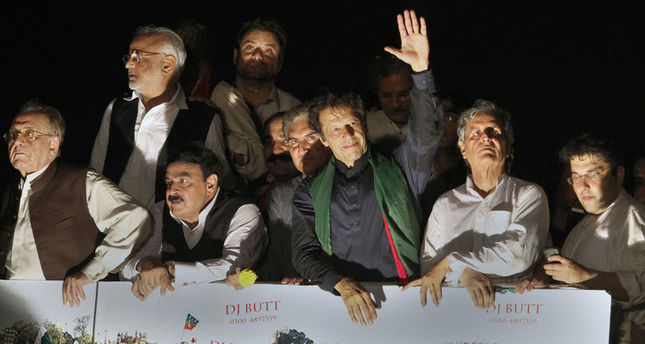 by AA Aug 21, 2014 12:00 am
Pakistani opposition leader Imran Khan warned police not to launch crackdown on supporters of his party, who are currently staging a protest calling for the prime minister's resignation.

Speaking outside parliament, Khan responded to rumours that the Islamabad's city police chief was removed for not ending the protests by claiming he would hold the head of police responsible for any attacks on protesters.

He warned current police chief Khalid Khattak that if a single worker is injured, "I will even punch you personally before sending you to jail."

"My PTI tigers, remove all obstacles and containers and reach here," he said. "Police, we shall remain peaceful, do not resort to violence."

The Pakistani government has denied that any crackdown on protesters is planned and claimed the previous police chief has not been removed but is on holiday.

Thousands of activists from Khan's Pakistan Tehrik-e-Insaf party are staging a sit-in outside parliament, demanding the resignation of Prime Minister Nawaz Sharif. They began their protests on August 14 when they marched from northeastern city Lahore to the capital city, Islamabad, after rebuffing offers for last-minute mediation.

The party's vice chairman Shah Mehmood Qureshi told reporters "Islamabad is again being sealed by the security forces; which is an effort to incite our workers."
Last Update: Aug 21, 2014 3:14 pm
RELATED TOPICS