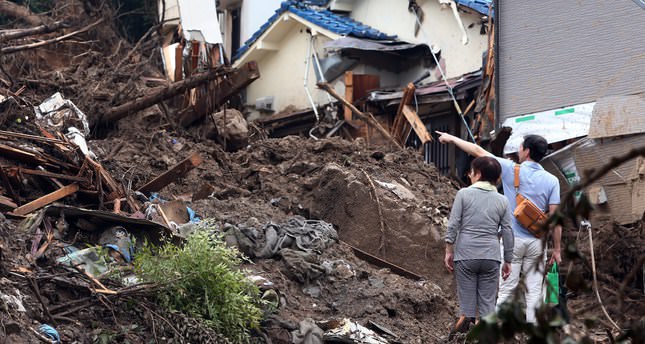 by French Press Agency - AFP
Aug 24, 2014 12:00 am
The death toll from devastating midweek landslides in Hiroshima rose to 50 on Sunday as fresh rain stoked fears of more disasters and hampered the round-the-clock search for survivors.

Meanwhile, two women were killed Sunday on the remote island of Rebun, some 1,350-kilometres (840 miles) northeast of Hiroshima, when a rain-triggered landslide crushed their home, local officials said.

The regional police headquarters in Hiroshima said 38 other people remained unaccounted for in the western Japan city, four days after unusual downpours caused landslides that swallowed dozens of homes, many of them perched on hillside housing areas.

A total of about 3,000 rescuers including ground troops, fire fighters and police continued digging through mud and debris in Hiroshima but the search and rescue operation was suspended for seven hours Sunday morning as fresh rain raised concerns about more landslips, public broadcaster NHK reported.

About 1,700 people remained sheltered at 13 safe public facilities while the Hiroshima city government upheld evacuation orders and warnings for 164,000 residents in the disaster areas.

On Rebun, an isle lying west of the main northern island of Hokkaido, 18 centimetres (seven inches) of rain fell in 24 hours, according to the region's weather observatory.

The downpour was due to a low pressure in the area, separate from a rain front affecting western Japan.
Last Update: Aug 24, 2014 2:39 pm