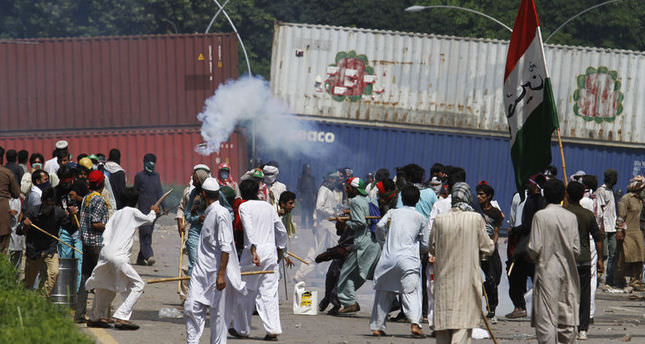 by Aug 31, 2014 12:00 am
Thousands of protesters massed outside the residence of Pakistani Prime Minister Nawaz Sharif on Saturday to demand he step down, after efforts to find a negotiated solution to the country's political crisis failed.

Pakistan has been gripped by unrest for more than two weeks, with protest leaders Imran Khan and Tahir ul-Qadri saying they will not back down unless Prime Minister Nawaz Sharif resigns. On Saturday Sharif once again said he would not go.

Security forces fired tear gas at protesters on Saturday night and the opposition said a woman was killed in the clashes. Police were not immediately available for comment.

Late on Friday, up to 8,000 protesters, some armed with clubs, had gathered outside parliament, with police on standby.

Pakistan's military stepped in this week to try to defuse the unrest. Qadri said the army had offered to mediate in the stand-off.

Pakistan, a nuclear-armed nation of 180 million, has been ruled by the military for half of its entire history and has repeatedly oscillated between civilian and military rule.

Although the army's role is key to how the crisis unfolds, few believe the army is bent on seizing power again.

Nevertheless, its public intervention has demonstrated how fragile Pakistan's democracy is, more than a year after Sharif swept to office in the country's first democratic transition of power.

Sharif has displeased the army by trying to strengthen civilian rule and improve relations with India and Afghanistan, and the latest conflict has given the military an opportunity to sideline him on security and foreign policy issues.

Sharif also angered the military by putting the former army chief, Pervez Musharraf, on trial for treason. Musharraf ousted Sharif in the 1999 coup.

The army's involvement is likely to unnerve some Pakistanis but it also offers Khan and Qadri a face-saving solution to end their deadlocked protest as both are seen as close to the military.