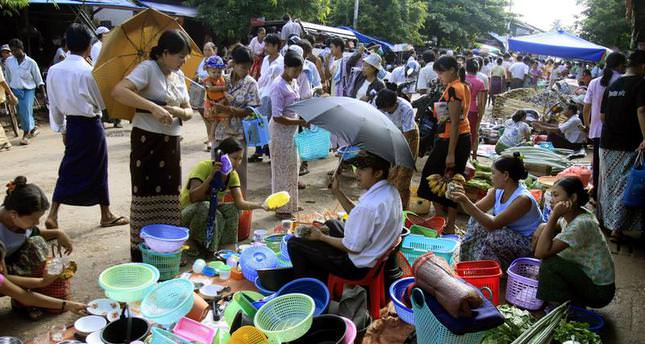 by AA Sep 01, 2014 12:00 am
The previous 1983 Myanmar census that reported having 61 million people far exceeded the most recent data due to non-inclusion of migrant workers and many Rohingya Muslims who objected to being recorded as "Bengali."

According to preliminary results of Myanmar's census, the country has 9 million less people than initially thought, raising initial questions as to why. Minister of Immigration and Population Khin Yi said while releasing the results of the U.N.-backed project that a major reason for the discrepancy is that migrant workers and students studying overseas were not included in the data. "In the past, we have announced that the population was over 61 million. We have announced the population figure every October. As we weren't able to conduct a census for over 30 years [...] the estimation in the past may not be accurate," Khin Yi told the media.

"The provisional result of the population in Myanmar is 51,419,420. The female population is 1.7 million more than the male population," he added. Khine Khine Soe, a director at the country's immigration ministry, said that despite the projection being based on the 1983 census and what appeared to be a mistaken expectation of growth in the population, around 1.2 million people were left out in parts of conflict-torn Kachin and Karen states - rebel-controlled land off-limits to census takers - and also in the western Rakhine state. Rakhine Buddhists objected to a persecuted Muslim minority called the Rohingya being included in the census, insisting they should be forced to be recorded as "Bengali," a name that enforces the spurious claim that they are illegal immigrants.

Myanmar news site ELEVEN reported Sunday that census data collectors were not able to conduct the census in Sittwe, Mrauk U, and Maungdaw districts in Rakhine "due to pressure given by the 'Bengalis.' " Many minorities had said the census could potentially weaken their political representation and claim to ethnicity if the process undercounts their group. In 2012, animosity between Buddhists and Muslims erupted in Rakhine leaving dozens dead and around 140,000 people, mostly Rohingya, displaced.

The last census was conducted in 1983 under a brutal military dictatorship known for manipulating figures to suit its own ends. Rights groups claim it deliberately undercounted Muslims. More accurate figures could reveal a much larger Muslim population than the 4 percent previously reported. The full result, including ethnicity and religion breakdown, is expected to be released May 2015.
Last Update: Sep 01, 2014 5:12 pm
RELATED TOPICS