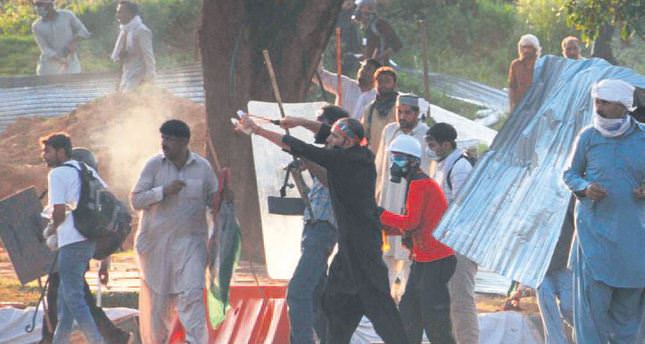 by Associated Press Sep 01, 2014 12:00 am
Pakistani police on Sunday clashed with scattered pockets of anti-government protesters trying to advance on the prime minister's residence after a night of violence that saw hundreds wounded and the first death in more than two weeks of demonstrations. The violence has raised the stakes in a political standoff, in which cricketer-turned-politician Imran Khan and cleric Tahir-ul-Qadri have led twin protests demanding the resignation of Prime Minister Nawaz Sharif, alleging massive voting fraud in the election that brought him into office last year in the country's first democratic transfer of power. Backed by parliament and many political parties, Sharif has refused to step down. Government negotiators have tried to convince Qadri and Khan to end their protests.

Senior hospital official Dr. Wasim Khawaja said Qadri supporter Naveed Razzaq drowned in a ditch after he was in a crowd that was bombarded with tear gas. Hundreds of people were wounded overnight as police battled protesters with tear gas, batons and rubber bullets near the premier's official residence and the adjacent parliament building.

The protesters started regrouping at daybreak Sunday and made repeated attempts to make their way through heavy deployment of police and barricades to reach the premier's residence. Police strengthened their lines and responded by lobbing tear gas canisters. Scores of protesters, including women, carrying hammers and iron rods broke down a fence outside the parliament building late Saturday, enabling hundreds of people to enter the lawns and parking area, according to an Associated Press photographer at the scene. Islamabad police chief Khalid Khattak said the protesters were armed with large hammers, wire cutters, axes and even a crane.

More than 300 people including women, children and police officers were admitted to two government hospitals in the Pakistani capital, medics and police said. The injured had wounds from tear gas shells, batons and rubber bullets, said Dr. Javed Akram, who heads the capital's main hospital. Akram said 182 people, including 37 police officers, were treated at the Pakistan Institute of Medical Sciences.

Another 152 people were brought to a government hospital near the scene of the clashes, said another physician, Dr. Tanvir Malik. The protests began with a march from the eastern city of Lahore on Independence Day, Aug. 14 that eventually reached Islamabad. Khan and Qadri had called for millions of protesters to join, but crowds have not been more than tens of thousands. The protesters' presence and heightened security measures have ground much of the capital to a halt. On Saturday similar marches were held in Lahore and Karachi, and on Sunday small demonstrations were held in other towns.

Riot police initially showed restraint during Saturday's march, but when the crowd started removing shipping containers used as barricades, they fired salvos of tear gas canisters that forced the crowds back. Interior Minister Nisar Ali Khan visited the scene of the protests late Saturday to boost police morale. "A group wanted to capture the prime minister's house and other buildings. We are under oath and the police as well, to protect the state assets," he told reporters
Last Update: Sep 01, 2014 5:13 pm
RELATED TOPICS