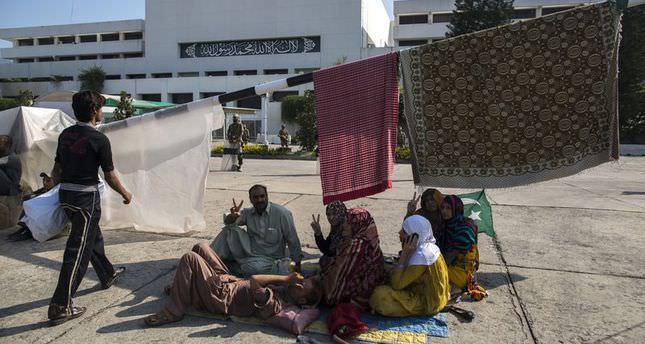 by AA Sep 01, 2014 12:00 am
Pakistani anti-government protesters have occupied a building that houses government ministries in Islamabad on Monday, using rocks to repulse a police attempt to disperse them with teargas and batons.

Some 800 to 1000 protesters charged at the police, helped by heavy rains that defused the teargas shells.

The army are guarding parliament; the prime minister's residence and other state buildings, warning protesters not to advance any further.

The soldiers did not intervene as some protesters set vehicles on fire and targeted police with petrol bombs and stones, injuring the city's police chief in the process.

Hospital sources confirmed that 20 injured were brought to hospitals on Monday morning, including five policemen.

The army warned the Prime Minister and opposition to urgently negotiate a solution to the crisis, which reportedly led to the deaths of three protesters over the weekend and has sparked concern that Pakistan may be headed towards military intervention.