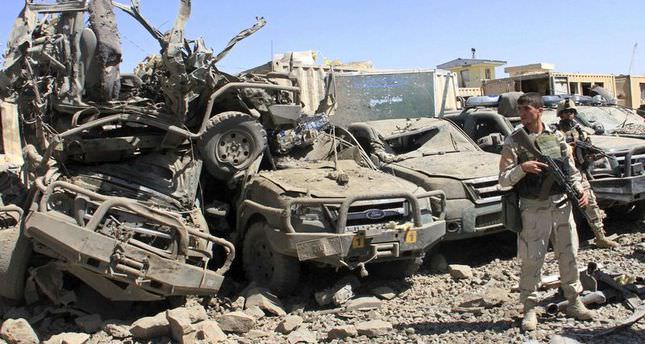 by Associated Press Sep 05, 2014 12:00 am
The Taliban struck a government compound in eastern Afghanistan on Thursday in a dawn attack that included two suicide truck bombings and left at least 12 people dead, including eight off duty policemen asleep in their quarters nearby. The assault followed a stark message from the Taliban to world leaders gathered at a NATO summit in Wales, which will also discuss the drawdown of the alliance's mission in Afghanistan. The exit of all foreign combat troops at the end of the year is proof that "no nation is able to subdue a free nation, especially a nation proud and free such as Afghanistan," the Taliban note said.

Thursday's attack started at sunrise, with the Taliban setting off two massive suicide truck bombs outside the government compound in the provincial capital of Ghazni, followed by an assault by nearly a dozen gunmen.

The assault triggered a gun battle with policemen and security forces at the compound and officials said all 13 assailants were subsequently killed, including the two suicide bombers. The Taliban claimed responsibility for the attack in a text message sent to media.
The bombs blew out many windows across the city, and left about 200 people injured, mostly from flying glass, said Ghazni Gov. Musa Khan Akbarzada. He said one truck carved a 10-meter (yard) hole into the ground. Sadly, the bombings also destroyed Ghazni's city library and two museums, the governor said.

The attack comes as Afghanistan is embroiled in a political crisis with the country's April presidential election still without a clear winner. Two candidates vying to succeed President Hamid Karzai pulled their observers out of a ballot audit meant to determine the winner of a June runoff. The audit's final results are expected sometime next week. Even though NATO forces are to leave Afghanistan, a small number of U.S. and international troops may stay on after 2014 to advise and assist the Afghans. But that is likely contingent on Afghanistan signing a security arrangement with the United States, something Karzai has so far refused to do.

And despite the exit of most foreign forces, violence between the Taliban and the Afghan government is expected to continue.Both presidential candidates - Abdullah Abdullah, a former foreign minister, and former Finance Minister Ashraf Ghani Ahmadzai - have pledged to sign the security deal. Had the vote been resolved, it was expected that Karzai's successor would have attended the summit in Wales. "Their 13-year-old occupation is now seen as a historical shame," said their statement, released late Wednesday. "It was planned that Afghanistan's next leader would participate in the Wales Summit. Now their plans have come to naught."

One of the truck bombs killed eight offduty police officers who were asleep in their housing unit near the site, said Khan Pacha Shirzad, a police commander. Three security forces and one civilian were also killed, said Zia Gul Esfandi, the director of the public health department.