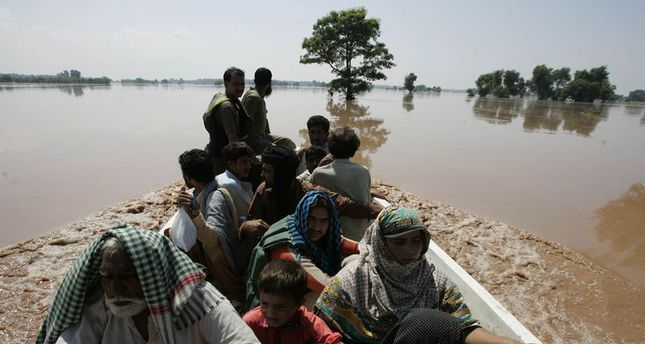 by Associated Press Sep 09, 2014 12:00 am
The death toll from floods in Pakistan and India reached 400 on Tuesday as armies in both countries scrambled to help the victims and authorities in Islamabad warned of more flooding in the days ahead.

The flash floods, which began on September 3, have put more than half a million people in peril and rendered thousands homeless in the two neighboring states.

Pakistani and Indian troops have been using boats and helicopters to drop food supplies for stranded families and evacuate victims.

The floods have also triggered landslides in both sections of the divided Kashmir region, split between the two arch-rivals, and caused much devastation in northern and eastern Pakistan.

The rains washed away houses, bridges, communication equipment and crops. Pakistani and Indian troops have evacuated more than 40,000 people to safer places, according to the statements from Indian and Pakistani armies.

So far, 205 have died in Pakistan while 200 perished in India, while nearly 700 people have been injured, officials said.

According to Ahmad Kamal, spokesman for Pakistan's National Disaster Management Authority, the floods were now moving toward Pakistan's south. Evacuations were already under way in several southern districts which could soon be inundated, said Kamal.

The Kashmir region in the northern Himalayas is divided between India and Pakistan and claimed by both. Two of the three wars the countries have fought since their independence from Britain in 1947 have been over control of Kashmir.

The relief packages the armies were dropping in the affected areas include blankets, food supplies, medicine and drinking water to thousands of people who had been moved to safer places.

Although the rains have stopped, the flood waters are likely to submerge hundreds of more villages. Pakistani authorities were bracing for worsening conditions as water levels in the Chenab and Indus rivers were rising, said Kamal, the disaster management officer.

Meanwhile, environmental experts in India said extensive deforestation of Kashmir's mountains has aggravated the damage due to the floods.