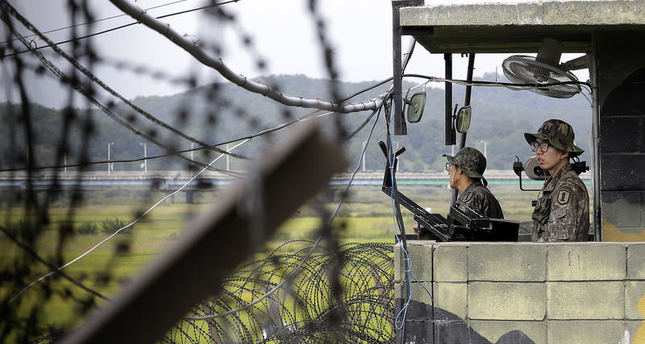 by AA Sep 17, 2014 12:00 am
A United States citizen is being interrogated by South Korean intelligence agents after attempting to swim from the South to North Korea, according to local reports Wednesday.

Yonhap News Agency cited a government source in stating that the man, thought to be in his early 30s and of Arabic descent, was caught by South Korean Marine sentries late Tuesday night.

He was found lying on the southern bank of the Han River where it borders the North in the west of the peninsula.

"I was trying to go to North Korea in order to meet with supreme leader Kim Jong-un," the detainee reportedly told officials following his arrest.

The Han flows through the South Korean capital of Seoul, before winding northwestward-where it becomes heavily guarded.

The two Koreas are still technically at war as a peace treaty never followed the Korean War ceasefire of 1953.

The dangers of unapproved border crossings were highlighted last year, when a South Korean man was shot dead by his own country's troops while trying to reach the North via the Imjin River.

In 1996, an American national was detained in North Korea after swimming across the Yalu River from China-he was released after three months.

Currently three U.S. citizens are being held in the North-including 24-year-old tourist Matthew Miller, who was sentenced Sunday to six years of hard labor for "hostile" acts.

Miller's motives remain unclear, but he is understood to have torn up his visa and attempted to claim asylum in North Korea after his arrival in April.

The U.S. government advises its citizens not to travel to the reclusive state.