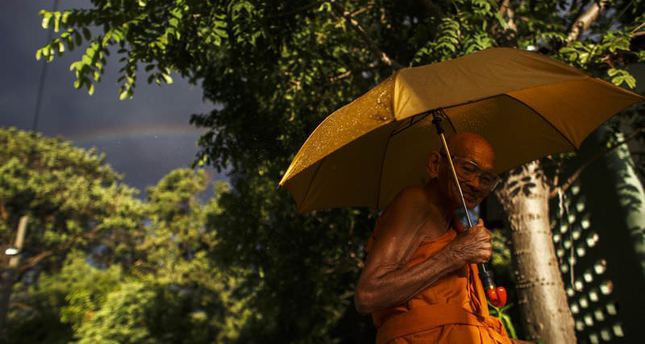 by AA Sep 22, 2014 12:00 am
Cambodian police have arrested two Buddhist monks in the tourist city of Siem Reap after finding them partying in a room in their pagoda with two women, booze and a pipe for smoking methamphetamine, local media reported Monday.

The raid came as Cambodia -- a deeply Buddhist country -- celebrates the annual Pchum Ben holiday, or the festival of the dead, a deeply holy time.

The 36-year-old monk whose room was raided by police had been under suspicion for some time, The Cambodia Daily reported, as he had rebelled against Buddhist doctrine and neighbors had complained of his noisy late night parties.

"Pich David was expelled in 2012 for bad behavior but we allowed him to return in 2013 after he pleaded with the pagoda authorities to come back and promised to adhere to the Buddhist doctrine and to follow the rules of the pagoda," the pagoda's chief monk, Keo Khouy, told the daily.

Monks are forbidden to drink alcohol or take drugs and must remain celibate.

"When we entered [Pich David's] room, we found alcohol, some condoms, and a pipe for smoking ice," Khiev Sort, a local police chief in Siem Reap, told the paper.

Two female market venders were also in his room along with other partiers, including two young men from the pagoda as well as another monk, Chan Bunna -- who tested positive for methamphetamine.

Both monks have been defrocked by the pagoda and charged with drug use.

It is not the first instance of Cambodian monks being defrocked for engaging in forbidden or criminal activity. Several years ago, a number of Buddhist clergy were arrested for rape -- including child rape -- and others have been defrocked for alcohol and drug use.