At least 36 feared dead on Japanese volcano, search called off 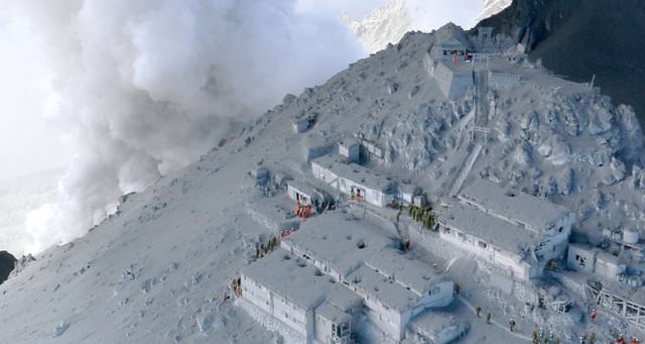 by Sep 30, 2014 12:00 am
At least 36 people are feared to have died after a Japanese volcano erupted without warning at the weekend, raining ash and stones on hikers, but the search for victims were abandoned on Monday because of fears of rising levels of toxic gases. Rescuers at the peak of Mount Ontake, now an eerie moonscape under a thick layer of grey ash, on Monday found what may be five new victims of Saturday's eruption at Japan's second-highest active volcano. The eruption of the 3,067-metre peak, 200 km west of Tokyo, took place as the popular hiking site was packed with climbers, including children, admiring autumn foliage under a brilliant blue sky.

Ten people have so far been confirmed dead and 63 have been injured, some with broken bones. Eight are missing, but officials said some of them could possibly be among those who perished.

More than 500 rescuers had been combing the summit, ploughing through knee-deep ash and passing mountain lodges with holes punched in their roofs by rocks shot out of the volcano. Helicopters lifted laden stretchers one by one from the summit on Monday, before rescue efforts were abandoned. As on Sunday, the smell of sulphur strengthened at the peak, fanning fears of toxic fumes and forcing rescuers off the mountain. Japan is one of the world's most seismically active nations. In 1991, 43 people died in a pyroclastic flow, a superheated current of gas and rock, at Mount Unzen in the southwest. Ontake, Japan's second-highest active volcano last had a minor eruption seven years ago. Its last major eruption, the first on record, was in 1979. Hikers said there was no warning of Saturday's eruption just before noon and hundreds were trapped for hours before descent became possible later in the day. "I felt a hot wind blast against my back and crouched down to the ground," a man told NTV. "I was sure I was going to die."

It was natural that Japan's Meteorological Agency, which monitors volcanic activity, might reconsider its surveillance system, said Chief Cabinet Secretary Yoshihide Suga. "However, I believe that, given current levels of knowledge, they made the only judgment they could," he told a news conference. Suga also said the eruption would have no impact on the restart of the Sendai nuclear plant in southwestern Japan, an area of active volcanic sites. The plant was just cleared to restart in early September. Experts said it was hard to have predicted the eruption, despite tremors in the area this month, since there were no other changes in the mountain. Also, the eruption appears to have resulted from a steam-driven explosion of a kind that is especially hard to forecast, said Toshitsugu Fujii, a volcano expert.

"They often occur quite suddenly and there is absolutely no guarantee that the earthquakes earlier this month were connected," he told a news conference on Sunday. "There is no guarantee of total safety when you're dealing with nature."