Five states to agree over the status of Caspian 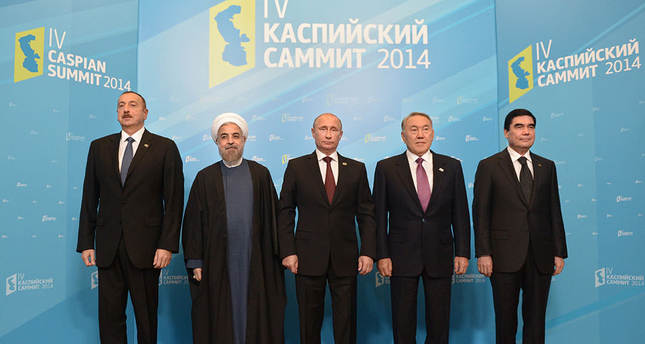 by Daily Sabah Sep 30, 2014 12:00 am
The presidents of five littoral states to the Caspian Sea – or lake – met in the Russian city of Astrakhan on Monday to determine the legal status and sharing of resources at the Fourth Caspian Summit.

Putin said that he is hopeful that an agreement on the legal status of the Caspian Sea can be adopted at the next summit, which will be held in Kazakhstan with an uncertain date.

Current treaties on the status of the Caspian were made between the Soviet Union and Iran. Following the dissolution of the Soviet Union, Azerbaijan, Kazakhstan and Turkmenistan emerged as littoral states with their own rights and claims over the Caspian, while Iran wanted to re-negotiate its terms.

The most important issue in the legal status of the Caspian is whether it is considered to be a lake or a sea. If it is described as a lake, the five states would equally divide the resources, however if it is described as a sea, each littoral state would have its own sector in accordance with their shores.

A description of sea would also mean the access of foreign vessels to the Caspian using Russian waterways as Volga. Although landlocked Azerbaijan, Kazakhstan and Turkmenistan would largely benefit from it, Russia is reluctant for such an access through its territory.

Kazakhstan has the longest coastline on the Caspian, and its sector is perceived as the richest one in terms of oil and gas resources, followed by Azerbaijan, Turkmenistan, Russia and Iran respectively. Therefore if the Caspian were to be agreed as a lake, Iran would be the most beneficiary state.

The most contested region stands in the middle of Azerbaijani, Iranian and Turkmen sector.

All countries agree over the non-presence of foreign militaries in the Caspian region, especially Russia and Iran support this stance.

A 15-nautical mile sovereignty space adjacent to each country's shoreline was agreed for fishing rights.