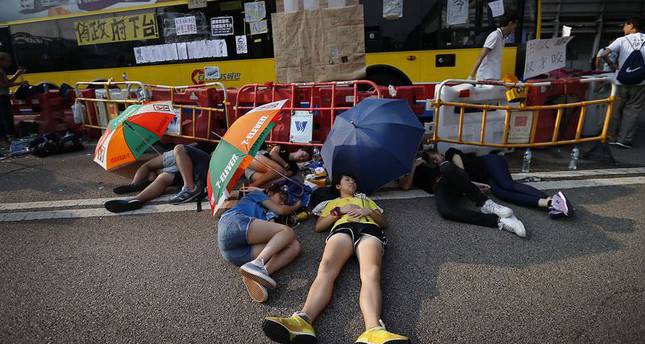 by Sep 30, 2014 12:00 am
Tens of thousands of pro-democracy protesters extended a blockade of Hong Kong streets on Tuesday, preparing for lond haul and thereby stockpiling supplies and erecting makeshift barricades ahead of what some fear may be a push by police to clear the roads before Chinese National Day.

Riot police shot pepper spray and tear gas at protesters at the weekend but withdrew on Monday to ease tension as the ranks of demonstrators swelled. Protesters spent the night sleeping or holding vigil unharassed on normally busy roads in the global financial hub.

Rumours have rippled through crowds of protesters that police could be preparing to move in again on the eve of Wednesday's anniversary of the Communist Party's foundation of the People's Republic of China in 1949.

"Many powerful people from the mainland will come to Hong Kong. The Hong Kong government won't want them to see this, so the police must do something," Sui-ying Cheng, 18, a freshman at Hong Kong University's School of Professional and Continuing Education, said of the National Day holiday.

"We are not scared. We will stay here tonight. Tonight is the most important," she said.

The protesters, mostly students, are demanding full democracy and have called on the city's leader, Leung Chun-ying, to step down after Beijing ruled a month ago it would vet candidates wishing to run for Hong Kong's leadership in 2017.

While Leung has said Beijing would not back down in the face of protests it has branded illegal, he also said Hong Kong police would be able to maintain security without help from People's Liberation Army (PLA) troops from the mainland.

"When a problem arises in Hong Kong, our police force should be able to solve it. We don't need to ask to deploy the PLA," Leung told reporters at a briefing on Tuesday.

There was a growing sense that the protests could come to a head later on Tuesday before the National Day celebrations.

"I don't know what the police or government will do to me but I am 100 percent sure I need to come out (tonight)," said Ken To, the 35-year-old manager of a restaurant in the densely packed Mong Kok residential district.

"We (Hong Kongers) don't only want money. We want out kids, our future, our education," he said.

China rules Hong Kong under a "one country, two systems" formula that accords the former British colony a degree of autonomy and freedoms not enjoyed in mainland China, with universal suffrage set as an eventual goal.

Protesters massed in at least four of Hong Kong's busiest areas, including Admiralty, where Hong Kong's government is headquartered, the Central business district, the bustling shopping district of Causeway Bay, and Mong Kok in Kowloon.

Organisers said as many as 80,000 people thronged the streets after the protests flared on Friday night but numbers appear to have dwindled slightly in some areas on Tuesday as some protesters went home to rest. No independent estimate of crowd numbers was available.

Alex Chow, the leader of the Hong Kong Federation of Students, said the protests, which began as a gathering of students and the "Occupy Central" movement, had become much broader and attracted Hong Kongers of all walks of life.

"It has evolved into a civil movement," Chow said.

Protesters set up supply stations with water bottles, fruit, crackers, disposable raincoats, towels, goggles, face masks and tents, indicating they were in for the long haul.

Some lugged metal road barricades into positions on the edge of crowds, presumably to slow a police advance. In at least one location, several minivans and a truck were parked in rows in an apparent effort to block a road.

At one Mong Kok intersection, six abandoned double-decker buses have been turned into makeshift noticeboards, their windows papered with messages of support such as "Please don't give up" and "CY Leung step down". Some protesters nearby clapped and cheered while others played the guitar and drums.

"Even though I may get arrested, I will stay until the last minute," said 16-year-old protester John Choi.

"We are fighting for our futures."

Protest organisers urged citizens to donate more yellow ribbons - another symbol of the protests - and goggles to protect against tear gas and pepper spray.

Communist Party leaders in Beijing worry that calls for democracy could spread to the mainland, and have been aggressively censoring news and social media comments about the Hong Kong demonstrations.

The demonstrations are the worst in Hong Kong since China resumed its rule in 1997. They also represent one of the biggest political challenges for Beijing since it violently crushed pro-democracy protests in Tiananmen Square in 1989.

The movement presents Beijing's Communist Party with a difficult challenge. Cracking down too hard could shake confidence in market-driven Hong Kong, which has a separate legal system from the rest of China. Not reacting firmly enough, however, could embolden dissidents on the mainland.

The deputy director of China's National People's Congress Internal and Judicial Affairs Committee, Li Shenming, wrote in the People's Daily: "In today's China, engaging in an election system of one-man-one-vote is bound to quickly lead to turmoil, unrest and even a situation of civil war."

Financial fallout from the turmoil has been limited so far as investors gauge how severe Beijing's response might be.

Hong Kong shares were down 1.5 percent on Tuesday, its second straight fall. Chinese shares were less troubled, perhaps because news of the protests in Hong Kong was hard to come by on the mainland.

The Hong Kong Monetary Authority, the de facto central bank, said 37 branches or offices of 21 different banks had been temporarily closed because of the protests.

The protests are expected to escalate on Wednesday, with residents of the nearby former Portuguese enclave of Macau also planning a rally but Hong Kong's streets remained relatively quiet, in places even jubilant, on Tuesday.

Some businesses have been directly affected, including luxury retailers in the Causeway Bay shopping mecca where protesters hunkered down.

The outside world has looked on warily, concerned that the clashes could spread and trigger a much harsher crackdown.

Washington has urged the Hong Kong authorities "to exercise restraint and for protesters to express their views peacefully", according to a White House spokesman on Monday.

The protests have also been watched closely in Taiwan, which has full democracy but is considered by Beijing as a renegade province that must one day be reunited with the mainland. Taiwan President Ma Ying-jeou said Beijing needed "to listen carefully to the demands of the Hong Kong people".

The United States, Australia and Singapore have issued travel alerts.