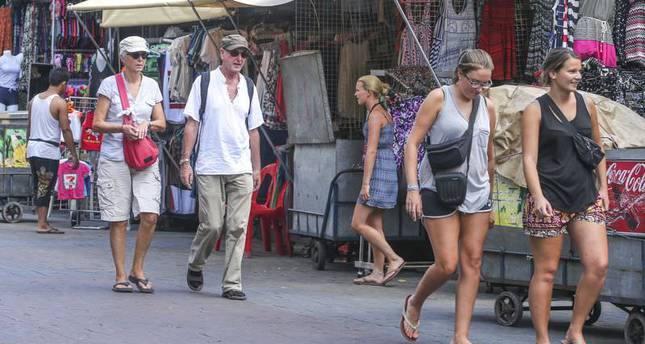 by Sep 30, 2014 12:00 am
Thailand's tourism minister said Tuesday that identification wristbands would be distributed to tourists following the murder of two British backpackers earlier this month which has raised fresh concerns over tourist safety.

Tourism and Sports Minister Kobkarn Wattanavrangkul said she had approached hotels over the idea of handing out wristbands to help identify tourists that get lost or into trouble.

"When tourists check-in to a hotel they will be given a wristband with a serial number that matches their I.D. and shows the contact details of the resort they are staying in so that if they're out partying late and, for example, get drunk or lost, they can be easily assisted," Kobkarn told Reuters.

"The next step would be some sort of electronic tracking device but this has not yet been discussed in detail."

She added that a "buddy system", pairing tourists with a local minder at tourist destinations, was also being discussed.

The bodies of Hannah Witheridge, 23, and David Miller, 24, were found on a beach on the southern island of Koh Tao, or Turtle Island, on Sept. 15.

Post-mortem examinations by Thailand's forensics department showed Witheridge died from severe head wounds and Miller died from drowning and blows to the head.

Almost three weeks after the murder police are no closer to an arrest as frustration mounts over the lack of a breakthrough.

Kobkarn admitted the wristband idea has already met with some resistance. "Most people welcome the idea but some hotels are concerned that tourists may not want to wear the wristbands."

Limiting party hours on some of Thailand's islands and imposing restrictions over where beach parties can be held were also being considered, said Kobkarn. The idea is unlikely to go down well with hoards of young backbackers who travel to Thailand each year in search of sun, sea and a good time.

Authorities have expressed concern over the murders' impact on tourism, which accounts for nearly 10 percent of GDP.

Thailand is still under martial law after a May 22 coup, something that has made many tourists think twice about traveling to the country.

The industry has yet to recover from a slump in visitors due to months of sometimes violent street protests that left nearly 30 people dead. Tourists arriving in Thailand fell 11.9 percent in August from a year earlier after a 10.9 percent drop in July.