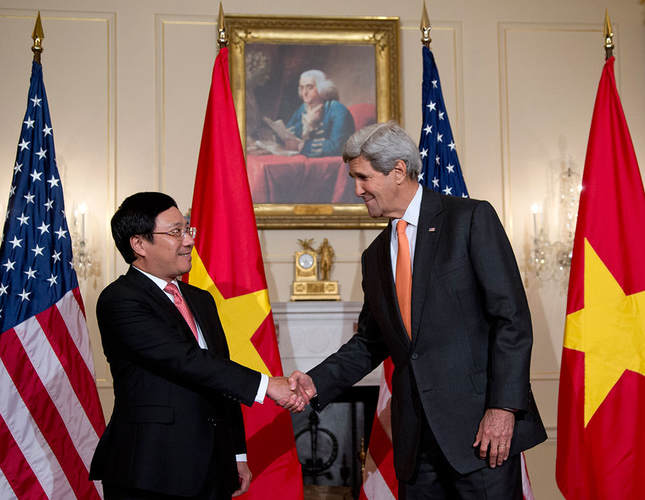 by Anadolu Agency Oct 03, 2014 12:00 am
The United States on Thursday partially lifted a long-time ban on lethal weapon sales to Vietnam to help it improve maritime security, a historic move that comes nearly 40 years after the end of the Vietnam War.

State Department officials told a separate briefing that the decision would ease a ban on sales of lethal weapons to Vietnam that has been in place since the end of the Vietnam War, although only for maritime security purposes at this point.

They said requests from Vietnam for any specific weapons would be evaluated on a case-by-case basis.

Vietnam has welcomed the decision on Friday, saying it will benefit both nations.

The focus would be on helping Vietnam patrol and defend itself in the South China Sea, amid growing naval challenges from China, the U.S. officials said, but future weapons sales could include airborne systems as well as ships.

Both Vietnam and China lay claims over the control of uninhabited Spratly and Paracel Islands located in the South China Sea that bears importance over oil exploration and fishing.

Several Vietnamese commercial and fishing boats were reported rammed, captured or sinked by the Chinese navy over the past years, while both countries exchanged statements and legislative acts to extend their claim over the islands.

The area is also contested by Taiwan, Philippines, Malaysia and Brunei.

U.S. Senator John McCain, a former prisoner of war in Vietnam, welcomed the news but also called for more work on human rights.

"Easing the lethal arms ban on Vietnam for the purpose of maritime security will strengthen our defense cooperation in ways that benefit both countries," McCain said. "How much more we can do in this regard, and how quickly we are able to do it, depends greatly on additional steps by Vietnam to respect and defend the human rights of the Vietnamese people."

The State Department officials declined to name any specific weapons systems that could be under consideration or give a timetable for expected agreement on the first such deal. They said providing surplus U.S. defense equipment to Vietnam could trim the cost, but Vietnam would need to contribute as well.

"This is a very important first step that will engender future cooperation," said one of the officials. "This policy revision enables us to ... provide Vietnam the ability to defend itself in the context of its presence in the South China Sea."

The officials said the decision follows some progress by Vietnam on human rights issues, including the release of six political prisoners and granting of amnesty for five more.

But they cautioned that further easing the arms embargo would require additional progress by Vietnam on human rights.

The officials said they did not expect backlash from China since the focus would be on providing Vietnam with defensive systems. "This is not an anti-China move," said one of the officials.

The easing of the embargo follows a gradual resumption of links between the United States and Vietnam over two decades.

U.S. industry executives see Vietnam as a promising market for their equipment given the U.S. military's strategic rebalance to the Asia-Pacific region.
Last Update: Oct 03, 2014 11:40 am
RELATED TOPICS