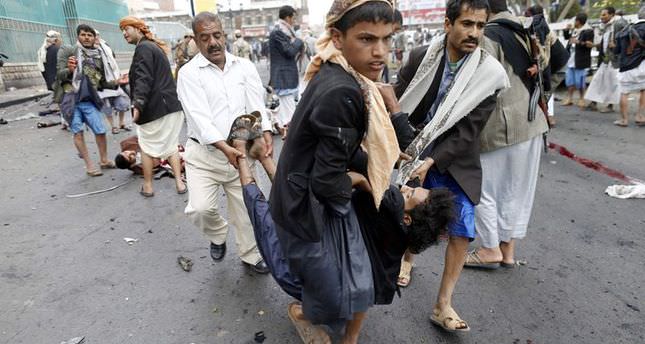 by Oct 10, 2014 12:00 am
Al Qaeda's wing in Yemen on Friday claimed responsibility for a suicide bomb attack on Yemen's powerful Shi'ite Houthi group that killed at least 47 people.

On Thursday, a suicide bomber detonated a belt packed with explosives at a Houthi checkpoint in the center of the capital Sanaa where Houthi supporters were preparing to hold a rally.

Body parts were scattered across Tahrir Square and pools of blood formed on the asphalt after the blast, which also wounded at least 75 people.

The bomb attack was carried out by a man called Abu Mouwaia al-Sanaani, al Qaeda in the Arabian Peninsula (AQAP), the Yemeni branch of the movement, said in a statement on its Twitter account.

Thursday's bombing occurred just hours after a showdown between the Houthis and President Abd-Rabbu Mansour forced Prime Minister-designate Ahmed Awad bin Mubarak, whose appointment on Tuesday under a power-sharing deal signed last month had angered Houthi leaders, to turn down the post.

The Houthis have emerged as Yemen's main power brokers since their paramilitary forces seized the capital on Sept. 21, following weeks of anti-government demonstrations.

AQAP, which has targeted state institutions, including the armed forces, sees the Houthis, who are members of the minority Zaydi sect of Shi'ite Islam, as heretics.

A southern secessionist movement and the AQAP onslaught on security forces has already stretched the resources of Yemen, an impoverished country of 25 million, and alarmed neighboring Saudi Arabia, the world's top oil exporter, and other Gulf Arab states.

Western and Gulf Arab countries are worried that instability in Yemen could strengthen al Qaeda and have supported a U.N.-backed political transition since 2012 led by Hadi meant to shepherd the country to stability after decades of autocracy.