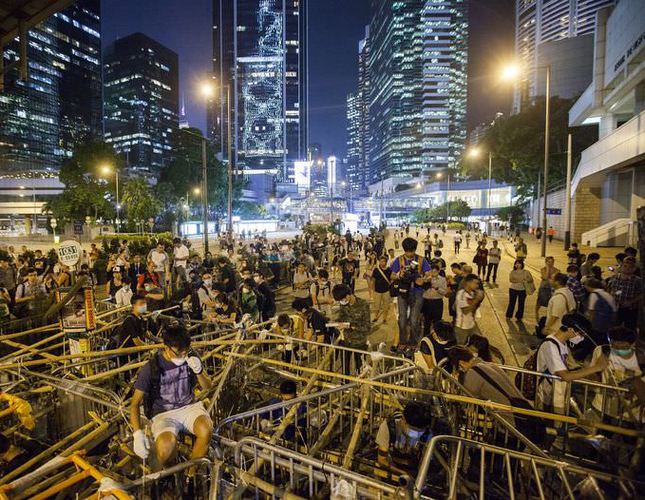 Chaos erupted in central Hong Kong on Monday as dozens of masked men rushed barricades at the city's main pro-democracy site, which triggered clashes with protesters hours after police had moved in to remove some of the barriers.

Groups of men, many wearing surgical masks, descended on the front lines of the rally at Admiralty near Hong Kong's central business district, while other angry anti-Occupy groups gathered demanding the demonstrators to leave.

Protesters, who have come under attack from organized crime gangs known as the triads at another flashpoint demonstration site in Mong Kok, shouted, "Weapons! Weapons!" and "Arrest the triads!"

Television footage showed one masked man being forced to drop a small flick knife while trucks with cranes moved in to remove barriers.

Taxi drivers also converged on the site with their cars demanding the barricades be removed and other anti-Occupy groups chanted, "Occupy is illegal."

The chaos broke out after around 100 opponents of the pro-democracy protests had gathered nearby.

Moments earlier, Hong Kong's embattled leader, Leung Chun-Yin, had told reporters in the Chinese city of Guangzhou that he wanted the protests to end. "Under the appropriate situation, we hope to allow society to return to normal as quickly as possible," he said on the sidelines of a trade meeting.

The demonstrators are calling for Beijing to grant full democracy to the former British colony and have brought parts of Hong Kong to a standstill over the past two weeks, prompting clashes with groups who oppose the blockades and widespread disruption. Despite repeated orders to disperse, the rallies have taken on an air of permanence, with tents, portable showers and lecture venues.

Police took down some peripheral barricades in a dawn operation that allowed for traffic to pass around the site for the first time in two weeks. The police said they were intent on clearing blockages to traffic rather than ending the protests outright. The overall atmosphere had been calm as small groups of protesters worked to reestablish barricades within police lines.

But some protesters voiced anger at what they saw as a police swoop. "There was no warning in advance whatsoever. It was nasty," student protester Lanny Li told AFP. Li said the occupied area is shrinking, which makes it more vulnerable. "This is the last line of defense for the people near the government offices," said Cherry Yuen as she sat in front of metal barriers 50 meters from police lines. "The police just want to trick us again. We won't move and I'm ready to get arrested," she said.

"The police refuse to communicate with us, they just do what they want," said Wong King-Wa, 25.

Some protesters in Admiralty wielded umbrellas, which have become emblematic of the Hong Kong movement, to guard against any police pepper spray. Many of those who remained near the police lines wore protective goggles and masks as well.

At least two-dozen police vans were parked close to Admiralty on Monday morning. Some officers around the site were carrying helmets and riot shields, though police numbers dropped mid-morning, AFP reporters said.

The police statement Monday said that some barricades had already been removed at the Mong Kok site.

"I'm angry because this umbrella movement belongs to Hong Kong students. The police should not be our enemy but our friends," Kim Kwan, a 21-year-old student, told AFP, criticizing Monday's intervention.

After police were criticized for unleashing tear gas on the rallies in late September, Leung said that if the government had to clear the protest sites, police would use a "minimum amount of force."

China announced in August that while Hongkongers will be able to vote for Leung's successor in 2017, only two or three vetted candidates will be allowed to stand – an arrangement the protesters dismiss as "fake democracy."

Students and pro-democracy campaigners have taken to the streets – sometimes in their tens of thousands – since last month to call for Beijing to change its position to allow unfettered elections and demand Leung's resignation.

But Leung said on Sunday, "In achieving universal suffrage in 2017, if the prerequisite is to put down the Basic Law and the decision made by the National People's Congress Standing Committee, I believe we all know that the chance is almost zero."

Talks between student leaders and city officials collapsed last week, deepening the crisis in the semi-autonomous city as protesters vowed to dig in for the long haul.