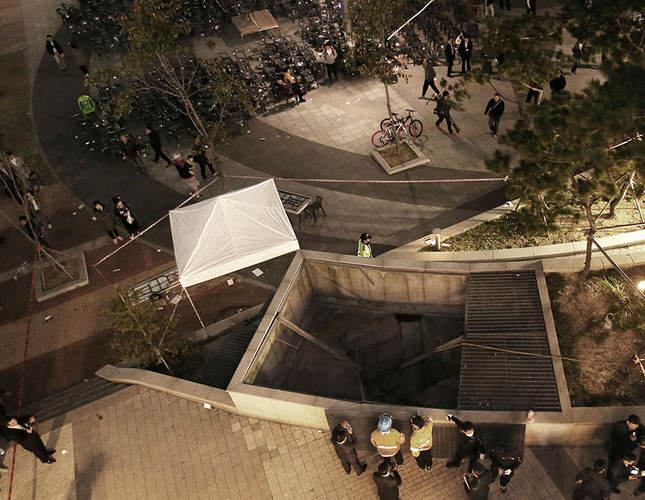 by Oct 18, 2014 12:00 am
A South Korean official handling safety measures at a concert where 16 people died apparently committed suicide hours after the tragedy which happened when a ventilation grate collapsed, authorities said Saturday.

The death of the 37-year-old local government official, surnamed Oh, was announced as South Korean police launched an investigation into Friday's incident at an outdoor pop concert in the city of Seongnam.

"I am sorry for the dead victims... Please take a good care of my children", he wrote in a short message to his wife, according to officials.

The victims were standing on a ventilation grating to get a better view when the structure collapsed under their weight, sending them plunging 18.7 metres (62 feet) down into an underground parking area.

The incident comes as South Korea is still grappling with the aftermath of the Sewol ferry disaster in April that left more than 300 dead, most of them high school students.

Disaster relief spokesman Kim Nam-Jun told journalists Saturday that Oh, who worked with a group sponsoring the concert, jumped off a building near where the tragedy took place.

He was found dead early Saturday a few hours after he was interrogated by police over the disaster, YTN TV said.

"A joint team of police and national forensic experts scoured the site this morning and closely inspected gratings and related structures," he said.

Police have questioned 15 people, including officials of the local Internet news provider which financed and organised the concert, Yonhap news agency said.

"If it turns out that safety regulations were ignored, we would bring criminal charges against them," a police official was quoted as saying by Yonhap.

Witnesses told media there were no security guards or safety fences to prevent overflowing spectators climbing onto the grate after some 400 prepared chairs were fully occupied well before the concert kicked off.

More than 700 people were believed to be attending the outdoor concert.

"Many people on the vent gratings were chanting and dancing to the music. I was worried about their safety but there were no security guards around," a 45-year-old man who runs a restaurant near the site was quoted as saying by Chosun Ilbo newspaper.

"The show host repeatedly told the spectators to come off the grate but no one paid heed to the warning," another witness told the paper.

"(Immediately after the accident), screams for help were all drowned out by the din from the concert", Lee Sang-Hoon, a witness, told Dong-A Ilbo daily.

A safety engineering expert, Professor Chung Jae-Hee of the Seoul National University of Science and Technology, said the incident was another "man-made" disaster.

"Basic safety precautions were all brushed aside. The organisers of the show should have at least set up temporary safety fences or deployed security guards there," he told AFP.

"These kind of safety hazards are latent in many places all over this country.

"Over the past decades, economic expansion always took precedence over safety concerns, resulting in the lack of safety conciousness among Koreans."

The Sewol ferry disaster prompted government promises of a national review of safety standards, as it became clear that poor regulatory oversight was a major contributor to the scale of the tragedy.

In February, the roof caved in on a student-packed auditorium near the southern city of Gyeongju, killing 10 people and injuring more than 100. An investigation uncovered evidence of structural flaws and lax management controls.

The last major accident at a music concert was in 2005 when 11 people were crushed to death and nearly 80 injured in a stampede as thousands tried to enter the stadium venue in the southeastern city of Sangju.