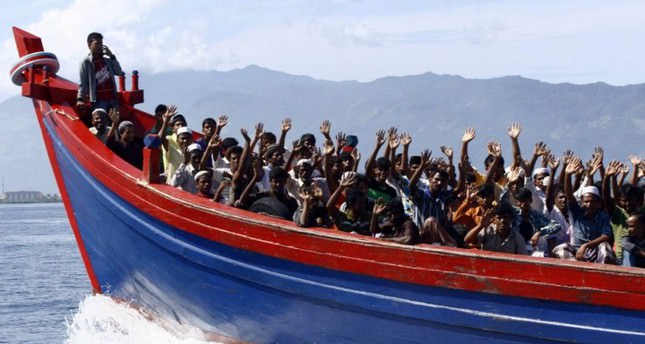 by Oct 28, 2014 12:00 am
A climate of fear in Myanmar's Rakhine state is pushing Rohingya Muslims to flee in "unprecedented" numbers, with almost 10,000 people taking to boats in the region in just two weeks, activists said Monday. A surge in boats leaving from northern Rakhine, where hundreds of thousands of Rohingya live in isolated communities, has seen around 900 people a day making the perilous journey by sea, according to the Arakan Project, a Rohingya rights group.

"This is very unprecedented, it's such a massive number," Arakan Project director Chris Lewa told AFP. "The end of the rainy season usually sees a spike in departures, but arrests and beatings in northern Rakhine combined with worries that authorities were planning to exclude Rohingya from citizenship had led to this huge rise. It seems now that many have decided that there is nothing left for them in Rakhine," Lewa added.

Lewa said some 100,000 people have now fled by sea from western Myanmar since June 2012, when conflict between local Buddhist and Muslim communities spiraled into widespread bloodshed across Rakhine that left 200 dead and 140,000 in displacement camps, mainly Rohingya.

The boats, many barely seaworthy, head to Thailand, Malaysia and beyond in an increasingly organized smuggling network.

Myanmar views the Rohingya as immigrants from neighboring Bangladesh and denies most of them citizenship, as well as imposes restrictions on travel, livelihood and even marriage.

Lewa said local people have reported arbitrary detentions and have spread fears over citizenship, after a leaked draft "action plan" for the impoverished state suggested those that refused to be identified as "Bengali" could be forced into camps.

The Rakhine government denied the claims. "They are spreading misinformation themselves," state spokesman Win Myaing told AFP. "There was no arrest or torture."

The Arakan project is virtually the only organization monitoring boat departures from Maungdaw in northwestern Rakhine and Bangladesh.

Lewa raised concerns that, so far, the wave of boats that left two weeks ago have not been heard from. In mid-October, Thai officials said people-smugglers had kidnapped dozens of people in Bangladesh and trafficked them to a rubber plantation in southern Thailand – with Rohingya refugees among them. Rights groups have previously accused Thai authorities of pushing boats back out to sea and holding migrants in overcrowded facilities.