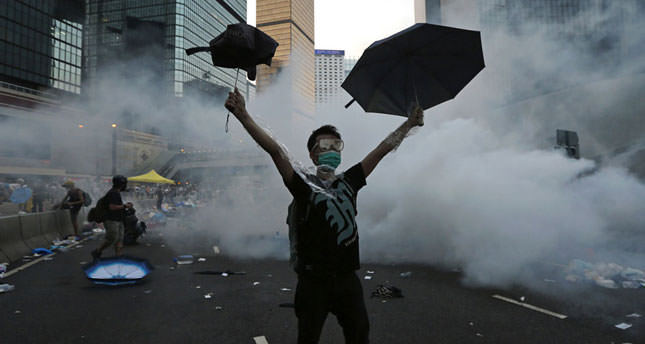 China claims that foreign powers infiltrated the protesters to escalate tensions and cause provocations, while protesters said the incidents reared a new political consciousness in Hong Kong

Hong Kong's pro-democracy protests have escalated into a national security issue threatening Chinese sovereignty over the Asian financial center, a delegate to China's rubber-stamp parliament said on Thursday. Businessman and lawmaker Michael Tien Puk-sun said support for Hong Kong Chief Executive Leung Chun-ying was crucial to the city's future stability and there was no longer any room to remain neutral. The protesters have blocked key intersections for a month in their demand for fully-democratic elections for the city's next chief executive in 2017. Beijing has said it will only allow a vote among pre-screened candidates. While the protests have remained largely peaceful, flashes of violence and dramatic images of students dressed in raincoats and safety goggles using umbrellas to protect themselves from tear gas and pepper spray have reared a new political consciousness in the city of seven million. "Because China has declared there are foreign forces and political influence behind Occupy Central, it has been elevated to a national security issue," Tien said, referring to one of the protest groups. "They are not fighting for democracy. They are fighting for independence. We are dealing with a sovereignty issue... Occupy Central is asking for complete democracy, something that only an independent state can provide." Tien was speaking a day after his brother, James Tien Pei-chun, was expelled from China's top parliamentary advisory body and resigned as leader of Hong Kong's pro-Beijing Liberal Party after urging the Leung to step down. Beijing has said it fully supports Leung. James Tien's swift removal from the Chinese People's Political Consultative Conference (CPPCC) is a sign of how concerned Beijing is about the protests which, at their peak, drew more than 100,000 people into the streets.

Hong Kong's increasingly charged political climate is also putting Chinese government officials on tenterhooks. China's liaison office in Hong Kong called an urgent meeting with Liberal Party leaders on Tuesday, calling them in the morning and asking them to attend a dinner meeting that night, said Liberal Party lawmaker Felix Chung. China's most senior official in Hong Kong, Zhang Xiaoming, explained the CPPCC's decision was specific to James Tien, Chung said. Zhang also said Beijing would continue to support the Liberal Party, according to Chung. The party in Hong Kong is pro-establishment and comprised largely of businessmen. Michael Tien said that the CPPCC was forced to act given the backdrop of the protests. CPPCC members are expected to fully support and promote its resolutions - or at least keep quiet once they are made, he said, adding that if the CPPCC had failed to respond to his brother's comments, its bylaws and code of conduct risked becoming "a bunch of hot air". "Membership comes with a certain price tag," Tien said. "I think my brother made the mistake of not recognizing that."

While CPPCC officials have said they still consider James Tien loyal, his brother says there is still debate over how to categorize him. "One camp calls him the 'conscience of Hong Kong' because he is willing to sacrifice his own political career to speak his mind. The other camp says he is not loyal and has betrayed his status as a pro-establishment member," Michael Tien said. "I think both camps are correct. That's why it's best for him not to be a CPPCC member. When you accept that appointment, it comes with certain obligations." James Tien declined to comment.