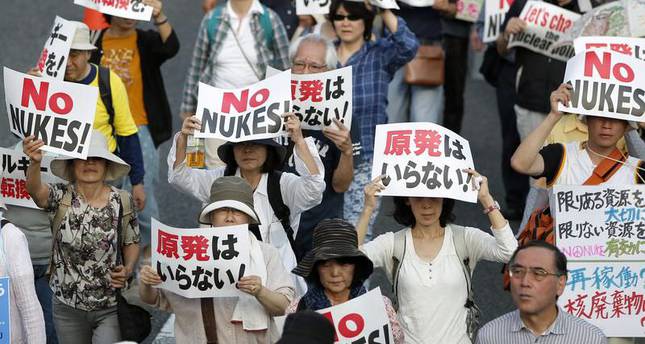 by reuters Nov 07, 2014 12:00 am
Regional authorities in Japan approved the restart of the idled Sendai nuclear plant of Kyushu Electric Power Co. on Friday, paving the way for a revival of the stalled industry more than three years after the Fukushima disaster.

The move represents a victory for the government of Prime Minister Shinzo Abe, which has defended the importance of nuclear power for resource-starved Japan and pushed to restart its fleet of 48 offline reactors.

The two-reactor Sendai plant, located 1,000 km (600 miles) southwest of Tokyo in Kagoshima prefecture, won an important endorsement for the restart from the local township last month.

"I have decided that it is unavoidable to restart the No. 1 and No. 2 Sendai nuclear reactors," Governor Yuichiro Ito told reporters, public broadcaster NHK showed.

"I have said that assuring safety is a prerequisite [for restarting] and that the government must ensure safety by publicly explaining it thoroughly to residents."

The Sendai plant is still unlikely to reopen until next year as the utility still needs to pass operational safety checks.

Kagoshima held several townhall meetings in areas closest to the nuclear plant ahead of the vote, but some residents complained that they were restricted from asking about evacuation plans.

In a vote on Friday, 38 of the 47 members of Kagoshima's prefectural assembly backed the restart.

Protesters crowded the assembly hall and stood up moments before the vote to wave pink signs that read "NO restart," local TV showed. Residents opposed to the restart lined the street outside the prefectural building, holding placards and flags protesting the decision.

The screams and yelling from opponents of the restart drowned out the final vote.

Japan has said it would defer to regional authorities to approve any restart. The Sendai plant now faces few obstacles, having secured approval from the host city, its mayor, the prefectural assembly and now an official endorsement from its governor.

If the move goes through, the Sendai reactors would become the first to restart under a new, independent regulator which was formed after a massive earthquake and tsunami set off multiple meltdowns at Tokyo Electric Power Co's Fukushima Daiichi plant in 2011.

Japan has been forced to import expensive fossil fuels to replace atomic power, which supplied around 30 percent of the country's electricity before the 2011 disaster.