North Korea sends thousands of workers to Qatar as slaves 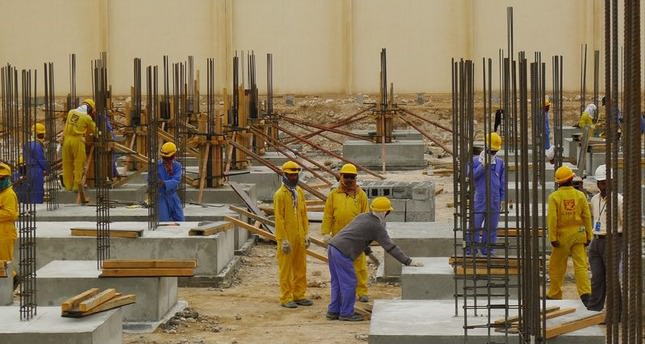 by daily sabah
Nov 07, 2014 12:00 am
North Korea has sent thousands of migrant workers to Qatar to work in construction sites without any payment for years, according to a report published from The Guardian on Friday.

According to testimonies gathered by The Guardian from North Korean workers and defectors, laborers, the migrant workers receive almost no salaries in person while they are working in the Gulf emirate for years.

As the workers expect that they will receive their earnings when they return to North Korea, defectors and experts say after a series of costs are removed from the workers' pay packets, such as food and accommodation are accounted for, they are only able to receive 10 percent of their salaries, some of them even receive nothing.

One North Korean worker said, "People like us don't usually get paid. The money does not come to the person directly. It has nothing to do with me it's the [North Korean recruitment] company's business."

According to the report, there may be as much as 65,000 North Koreans abroad as 3,000 of them are currently working on projects in Qatar.

Meanwhile, Qatar's treatment of its migrant laborers has been harshly criticized, following reports that revealed widespread deaths and abuse among migrant workers. In May 2014 Qatar announced a series of reforms to improve the workers' living and working conditions and ensured that the emirate will take all issues around worker payment extremely seriously.
Last Update: Nov 07, 2014 10:27 pm