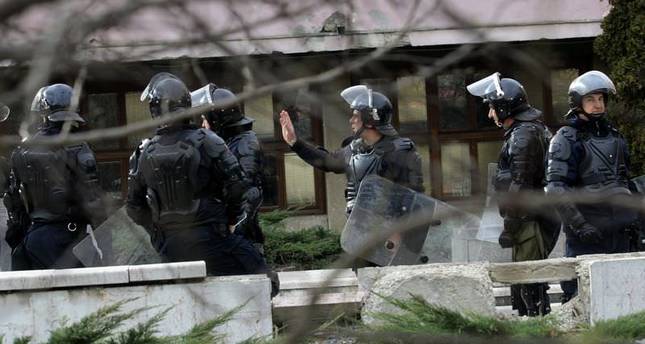 by reuters Nov 13, 2014 12:00 am
Police in Bosnia arrested 11 people on suspicion of fighting alongside ISIS militants in Syria and Iraq or recruiting and raising money for such groups on Thursday.

More than 100 officers took part in the operation - codenamed "Damascus" - in five central Bosnian towns including the capital Sarajevo.

In April, the country introduced jail terms of up to 10 years for Bosnians who fight or recruit for groups abroad such as the self-proclaimed Islamic State of Iraq and Al-Sham (ISIS). Hundreds are thought to have joined the wars in Syria and Iraq, along with other Muslims from across the Balkans.

"The detained are suspected of links with financing, organising and recruiting Bosnian citizens to leave for Syria and Iraq and fight in armed conflicts there alongside radical terrorist groups and organisations," Bosnia's State Investigation and Protection Agency (SIPA) said in a statement.

The prosecutor's office said it had evidence that some of the suspects had weapons and explosives.

In September, 16 people were detained on suspicion of aiding terrorist groups abroad. Five are still in custody, among them Bilal Bosnic, an unofficial leader of the conservative Muslim Salafi movement in Bosnia, who was reported to have called on young Muslims to join the ranks of ISIS.

Most Bosnian Muslims, who account for around 45 percent of the population and are known as Bosniaks, are secular or practice a moderate form of Islam. More radical strains have taken root since Bosnia's 1992-95 war, fuelled in part by poverty and unemployment.

Fighters came from Iran and Arab states during the Bosnian war to fight alongside the Muslim Bosniaks against Orthodox Serbs and Catholic Croats.