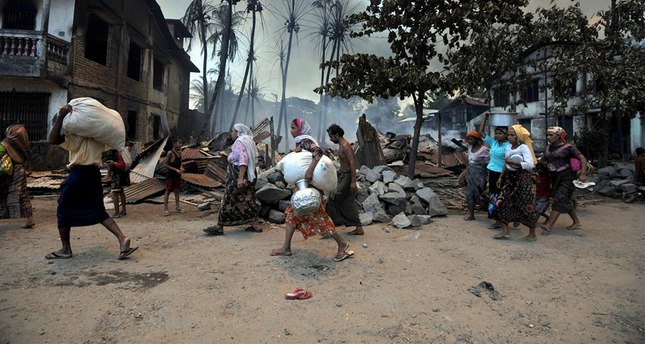 by daily sabah
Nov 13, 2014 12:00 am
The appalling humanitarian situation of stateless Rohingya Muslims has received worldwide attention as U.S. President Barack Obama voiced his concern over the beleaguered Muslim community living in the Rakhine state, whose ethnic majority is the Rakhine population, while calling on the government to allow them to become citizens. Attending the East Asia Summit, the annual meeting of national leaders from the east Asian region in Myanmar, Obama urged the Myanmar government to take solid action to protect fundamental rights and freedoms to all those living in the nation without allowing any discrimination within the country's territories.

Rohingya Muslims have long been facing serious humanitarian abuses in western Rakhine state due to serious inter-religious conflicts. The Myanmar government has not taken enough steps to end the ethnic and religious tensions that have led to violence against the Muslim population. As Obama urged for political change in the country through substantive reforms in fundamental rights and constitutional policies, the protection of minority rights is the key issue that needs to be dealt with on the path to Myanmar's democratic transition. Yet, it is less likely that Myanmar can fully transition into democracy as the government has committed grave violations of human rights against Rohingya Muslims. Despite government efforts to build a more open society on the path to democracy, the country has still been suffering from narrow and discriminatory nationalism, which is in turn creating violent extremism towards the Muslim minority.

"It was an excellent discussion about this transition taking place in Myanmar around consolidating some of the gains that have been made," Obama said, reported Reuters. "But also in pushing further to institute a genuine democracy here in this country that can serve the needs of all of its people," he added.

About 140,000 stateless Rohingya Muslims were internally displaced due to increasingly violent attacks by Buddhists. As Myanmar's Buddhist-Rohingya ethnic divide has escalated, a series of reports of serious human rights violations reports showed that many Rohingya have lived under appalling conditions, seeking refuge in neighboring Thailand and Bangladesh, with many losing their lives.

Myanmar government plan to introduce the "Rakhine State Action Plan" in order to solve problems faced by the Rakhine State where intercommunal and inter-religious conflict with minority Muslim communities and extreme poverty are the major problems in the region. Human Rights Watch (HRW) accused the government of prompting segregation between the Rakhine – who are Buddhists – and Rohingya Muslims. The plan was not enough to end the rising anti-Muslim violence and hate speech toward the Muslim population that is being spread by nationalist Buddhist monks who urge Buddhists to boycott Muslim businesses and avoid marrying Muslims.