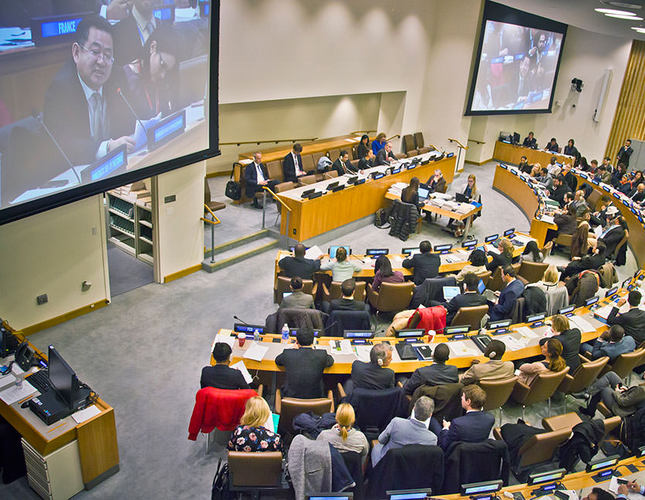 by Associated Press
Nov 19, 2014 12:00 am
The world's boldest effort yet to hold North Korea and leader Kim Jong Un accountable for alleged crimes against humanity moved forward on Tuesday at the United Nations, where a Pyongyang envoy threatened further nuclear tests.

The U.N. General Assembly's human rights committee approved a resolution that urges the Security Council to refer the country's harsh human rights situation to the International Criminal Court. The non-binding resolution now goes to the General Assembly for a vote in the coming weeks. China and Russia, which hold veto power on the council, voted against it.

The resolution was inspired by a groundbreaking U.N. commission of inquiry report early this year that declared that North Korea's human rights situation "exceeds all others in duration, intensity and horror."

The U.N committee has adopted similar resolutions on the North's abysmal human rights conditions in the past. But the possibility that their absolute leader could be targeted by prosecutors, included in this year's resolution, has pushed the communist country to make a more furious response since this poses a setback to its recent efforts to improve ties with the outside world to lure foreign investment and aid and revive the country's troubled economy. North Korean officials would also view the resolution as a potential embarrassment to their young leader who took power after the death of his dictator father Kim Jong Il in late 2011.

North Korea sent a sharp warning before the vote. Trying to punish it over human rights "is compelling us not to refrain any further from conducting nuclear tests," said Choe Myong Nam, a foreign ministry adviser for U.N. and human rights issues. His colleagues gave no details on that threat.

Choe also accused the European Union and Japan, the resolution's co-sponsors, of "subservience and sycophancy" to the United States, and he promised "unpredictable and serious consequences" if the resolution went forward.

The European Union quickly issued a statement welcoming the support of 111 countries in the vote. Nineteen countries voted against, and 55 abstained.

"It is admirable that the member states of the United Nations are acting to protect the people of North Korea when their own government fails to do so," the head of the commission of inquiry, retired Australian judge Michael Kirby, said in an email, adding that he is confident the Security Council will "act responsibly."

Human rights groups turned their attention to China and Russia, which could block any Security Council move. "No Security Council country, including China, can deny the horror endured by so many North Koreans," Kenneth Roth, director of Human Rights Watch, said in a statement just after the vote. "The time has come for justice."

North Korea and its allies have argued that a resolution that targets a single country would set a dangerous precedent and that other developing countries could be singled out, too.

The resolution says the commission of inquiry report found grounds to believe that crimes against humanity have been committed under policies "established at the highest level of the State for decades." It calls for targeted sanctions against the people who appear to be most responsible. The commission of inquiry earlier warned Kim Jong Un that could include him.

Cuba proposed an amendment that would have stripped out the tough language on the ICC, but the committee's member countries voted that down earlier on Tuesday.

The mere possibility that its leader could be targeted by prosecutors has put North Korean officials, once dismissive of human rights issues, on edge. In recent weeks, it dangled the possibility of a visit by the U.N. human rights chief, among other attempts at outreach.

"The North Koreans are responding strongly to the U.N. resolution because they think it's shaking the young leader who's been trying to consolidate his power since inheriting power only a few years ago," said Lim Eul Chul, a North Korea expert at South Korea's Kyungnam University. "They would think their international image has been seriously hit."

But the North is unlikely to make good on its threat to conduct a nuclear test because the country knows such an action would invite further international condemnation. Also, there is little chance that Russia and China will let the Security Council refer the North's human rights situation to the ICC in The Hague, analysts said.

"North Korea's reaction will mostly be verbal. They may threaten nuclear and missile tests, but they probably won't carry them out," said Yang Moo-jin, a professor at the University of North Korean Studies in Seoul.

In the chamber on Tuesday, a North Korean foreign ministry adviser, Kim Ju Song, was witnessed trying to get a U.N. official to eject Shin Dong-Hyuk, a young man who fled North Korea and has since spoken out against the Pyongyang regime.

The commission of inquiry report was based on interviews with dozens of people like Shin who had fled and detailed abuses including starvation and a system of harsh prison camps containing up to 120,000 people.

North Korea has accused people who cooperated with the commission of inquiry of lying, and it produced a video showing Shin's father in North Korea condemning him.

But Shin, who bowed to Japan's ambassador in thanks after the vote, said North Korea's attempt to intimidate him and others backfired. "This was an overwhelming defeat," he said.