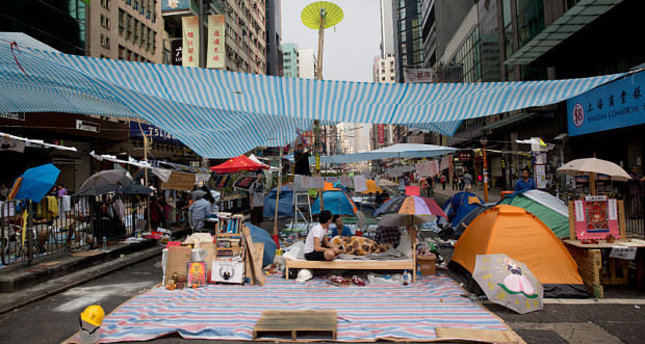 by Dec 10, 2014 12:00 am
Hong Kong's High Court has ordered the main protest sites that have choked the financial city for more than two months to be cleared, building up to a final showdown between pro-democracy activists and authorities backed by Beijing.

A local bus company, which was granted an injunction against street blockades at the site in Admiralty, which is home to government offices and next to the main Central business district, has received an official clearance order from the High Court, according to notices posted in local papers on Tuesday.

Student groups have been calling for a free vote in the Chinese controlled city through largely peaceful demonstrations dubbed the "Umbrella Movement". At their peak, the rallies drew more than 100,000, but their number has dwindled and now there only dozens left.

Chief Executive C.Y. Leung, who has branded the protests illegal, has rejected calls for more talks on political reform and warned protesters not to turn to violence when the clearance starts.

Splinter protest groups calling for democracy for Hong Kong are springing up and fast-tracking action plans as student-led demonstrators consider a retreat from the main protest site which has blocked key downtown arteries since the end of September.
Police are expected to clear the sites on Thursday with over 3,000 officers, the South China Morning Post newspaper reported, citing police sources. The Hong Kong bus company All China Express which published details on the injunction is expected to hold a meeting with court bailiffs on Tuesday to discuss further actions.

On Tuesday, the site remained quiet filled mainly with visitors taking photographs. By 6 pm on Monday many supply tents in the area covered by the court order had either been dismantled or relocated to nearby locations.

Mani Chan was among the last group to move to a new site 10 meters away, still on the roadway but outside the injunction zone. "This station and the volunteers (here) are forming a defense line," Chan said. "We are going to stay anyway."

Clashes between protesters and police increased at the end of November after the clearance of protest sites in the densely populated working-class district of Mong Kok district, on the Kowloon side of Hong Kong harbor.

One man was jailed for six months on Monday for threatening to burn Mong Kok demonstrators with paint thinner, media said on Monday. Hong Kong, a former British colony, was returned to China in 1997.

Under a "one country, two systems" formula, the city has some autonomy from the Communist Party-ruled mainland and a promise of eventual universal suffrage. Beijing has allowed a vote in the next election in 2017, but insists on screening any candidates first.

Student groups have been considering a retreat from the main campsite for over a week with key leader Joshua Wong saying his group would maintain the principle of non-violence during the clearance of the Admiralty site. Volunteers are currently considering how to pack up the huge amount of supplies from tents and toiletries to saline solution and cereal. Cheung, a middle aged volunteer who would only give his surname, said in the coming days the supplies from his station might be transferred to a warehouse and stored for future campaigns and some would be given to the Hong Kong Federation of Students.

Another volunteer Peter Chan said his station would donate supplies to charity groups, or transferred to places including universities.