Australian PM under fire for gaffe about women and household bills 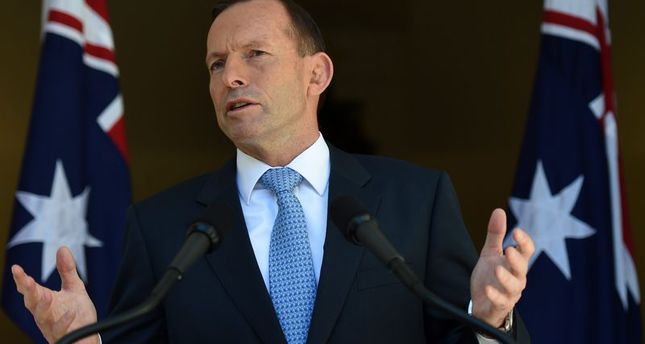 by Dec 22, 2014 12:00 am
Australian PM under fire for saying his biggest achievement for women was repealing carbon tax

Australian Prime Minister Tony Abbott was accused Monday of craving "a world where men do the big jobs and women do the ironing" after saying his biggest achievement for females was reducing household bills by axing a carbon tax.

The backlash came after he unveiled sweeping changes Sunday to his ministry, dumping Defence Minister David Johnston, promoting Immigration Minister Scott Morrison and appointing only his second woman to cabinet.

It followed recent opinion polls showing his personal approval rating and that of his conservative government had plunged over tough spending cuts and perceived broken promises since coming to power late last year.

Abbott hit the airwaves Monday to sell the reshuffle as a "reset and refocus" for the new year, but found himself the brunt of criticism after saying his biggest achievement for women this year was repealing the carbon tax.

"As many of us know, women are particularly focused on the household budget and the repeal of the carbon tax means a Aus$550 (US$447) a year benefit for the average family," Abbott, who doubles up as minister for women, told the Nine Network.

In opposition Abbott, who was accused of sexism by former leader Julia Gillard in an infamous speech about misogyny, claimed repealing the tax would help women by lowing electricity costs associated with ironing.

Labor frontbencher Anthony Albanese told Fairfax Media Abbott was stuck in a time warp.
"The problem isn't that Tony Abbott's stuck in the past, it's that he wants the rest of Australia to go back there and keep him company in a world where men do the big jobs and women do the ironing," he said.

Labor Senate leader Penny Wong added: "I think we can safely say that time and time again, over and over again, Tony Abbott just reminds us how out of touch he is with the lives of women in modern Australia."

His comments spawned numerous digs on social media as women pondered what they would do with the extra money, with the hashtags #thankstony, #PutYourIronOut and #ministerforwomen trending, with people posting pictures of irons.

"Was planning to write paper for Astrophysical Journal today but too distracted by household budget," tweeted scientist Lisa Harvey-Smith.

Another said: "#thankstony, with the Carbon tax repeal I can buy a new apron," while tweeter Willa McDonald added: "I know where I'd like to put my ironing board."

Since assuming power in September 2013, the government has announced savings across the board to rein in a growing budget deficit.

But critics have slammed some of the measures, which include slashing health and education spending while tightening welfare benefits, as broken pre-election promises and too harsh.

There has also been criticism of the government's ability to adequately explain why the cuts were needed, but Abbott denied the reshuffle was damage control.

"No," he told the Seven Network when asked if this was the case.

"This is a good way to end the year after a year of considerable achievement.

"The vital challenge of government next year is more jobs, more prosperity for families, but the way to achieve that is to build a stronger economy and that means continuing our work to get the budget back under control," he added.

Among the cabinet changes, Morrison was moved to the social services ministry with Abbott making welfare reform one of his key priorities.

Johnson was replaced by Health Minister Peter Dutton while Assistant Education Minister Sussan Ley assumed the health and sport portfolios, doubling the number of women in the ministry. Julie Bishop is Foreign Minister.