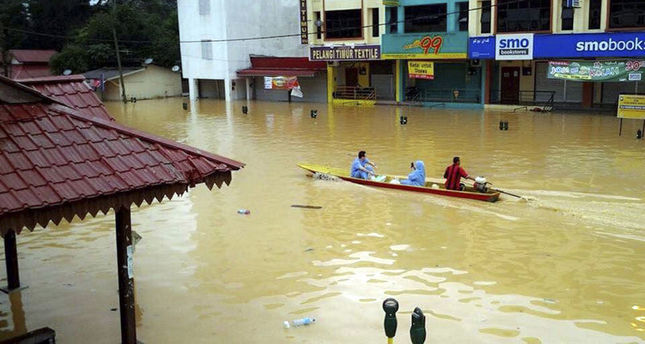 by AA Dec 26, 2014 12:00 am
More than 103,000 people have been evacuated due to flooding in four states in peninsular Malaysia during the heaviest rainy season downpour in decades.

Pahang state experienced the largest increase in the number of evacuees, as an additional 6,000 displaced persons brought the total to more than 35,700 on Friday, according to the Malaysian Insider news website. Of the displaced, nearly 20,000 are currently sheltering at 44 relief centers in the state capital of Kuantan.

In Kelantan, the number of evacuees decreased slightly from almost 35,000 to around 32,000 as six districts experienced an improvement in the flooding situation.

More people were also displaced in Terengganu and Perak, bringing the total evacuees in the states to more than 30,000 and 5,500, respectively.

Perak's sultan Nazrin Shah announced that all scheduled entertainment events had been canceled and ordered that all mosques hold additional ceremonies after the Friday prayers to pray for an improvement in the region.

Meanwhile, the cancelation of programs in Putrajaya was announced by the federal territories minister, who defended Prime Minister Najib Razak against criticism for being abroad as the country deals with the worst floods in four decades.

"Some say PM does not bother, ministers don't bother... all this is propaganda and slander," the Insider quoted Tengku Adnan Tengku Mansor as saying at a press conference at the ministry's Christmas open house on Thursday.

Explaining that the costs of the New Year's Eve festivities were covered by the Ambank Group, he said he would consult the group's chairman on whether the RM3 million ($850,000) for the celebration could instead be used in flood relief efforts.

While Kuala Lumpur has not been hard hit by flooding, Mayor Ahamd Phesal Talib has announced that the City Hall rescue unit, Fire and Rescue Department and other government agencies are ready to assist the public in the case of a natural disaster.

"We have enough personnel to face the flood situation. We will utilize the assets we have in the best way possible to provide immediate help to the flood victims," he told Bernama.

On Tuesday, nearly 100 people - including around 60 tourists - were stranded at a national park in Pahang that recorded its highest rainfall since 1971, and later rescued by helicopters and boats.